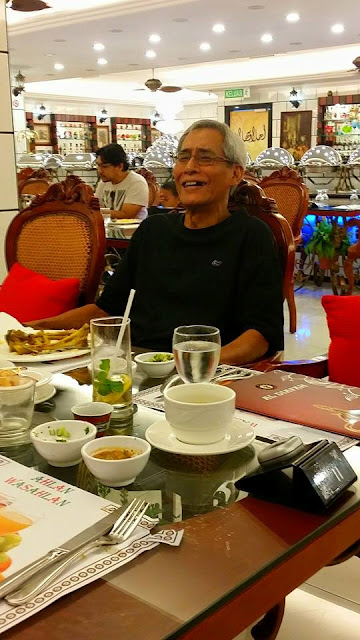 The first abode I could recall was in Taylor Road...that's the one behind the old Istana Negara. If one drove further up they would be in Jln Bellamy. I was about 7 years old. That was sixty six years ago. I hope my memory does me justice and my recollections genuine. For many, it could be more than a lifetime.

I could not remember my father ever owning his own car. I saw in an old photograph him standing beside a open top 1940's roadster. I suppose it must be his and that was how he wooed my mother, a Chinese lass. It was quite unheard of in those days for a Malay like him, from a prominent family to marry a non Malay. But he was known to be unconventional and also the eldest among 9 siblings (6 boys and 3 girls), he follows his heart more than his head.

But he still had wheels, though not his own. First, one of his brother, Jamal Latiff was assigned to UK and he left his car, a Hillman California to my dad for safe keeping. We had the car for about a year. When my uncle returned to Malaya the car was returned to him. My father had a promotion and we moved to a bungalow in Young Road or Jln. Young. The house is in a side lane in today's Bukit Aman complex.

Life was good. During this period, father's brother-in-law, Ismail Ali (Tun) and his newly wedded wife Maimunah Latiff was posted to London. And he left his car, a Wosley in my dad's care. So he had no reason to get his own. We had the Wosley for about 2 years. 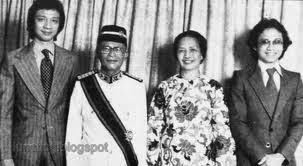 Inexplicably our world fell apart. I was 10 years old. I did not feel anxiety or anything much out of the ordinary. Perhaps the gradual buildup of impending hopelessness had softened the blow when the time came. My father was pensioned off at the young age of about 45..via medical board. My mother had got herself reemployed as a dental nurse in the govt. Dental clinic when dad was hospitalized for long period of time. Finally it happened. Jobless, we had to vacate the house in Jln. Young. (As an aside I was already aware of the Nasi Lemak Tanglin..their original stall in front of the kopitiam in Tanglin).

In time of despair this man and his family took us in. They did not put us in the servants quarters (govt. houses then had separate servant quarters from the main house) but gave us a big room in the main house. We ate whatever they eat together from the same dining table. The house was in Damansara. As one drive down the road from Carcosa, it was the house as one reaches the main road. I doubt the house still stands today. And this person I am talking about is my uncle, the late Ya'acob Latiff. 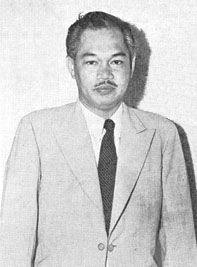 To Mak Anjang, I never thanked you and your family for what Pak Anjang did for us. I can only pray that Allah swt bless you all.
There is so much to share. 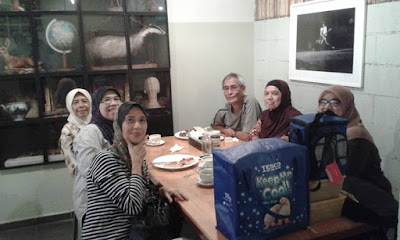 The man Himself : Mamat Karim

When people ask me, "kampong mana?", I tend to give conflicting replies. One's kampong is always the village...hamlet...or where your parents lay down roots. I was born in Court Hill on 16 Nov 1943. The Maybank building complex occupies the site today. So in my confused sense of belonging and identity, I usually say that my kampong is Kassipillay Kampong in Sentul. Which is where my grandfather was from. To tell folks that I am from Court Hill will surely get me the funny look. And if I say Kuala Lumpur then they will assume I am really dumb. So grandpa's place was the safe bet.

My father passed away in 1962. He was in his early 50's. He was an Assistant Superintendent of Police when he was medically boarded out of the Force in his mid 40's. His health was always a negative factor. He was on medical leave often and there were days he was a patient at the General Hospital. I had to skip school to care for him when he was admitted.

Yet I never really got to know him, as kids today where father and son are almost friends. Our relationship was, "children are meant to be seen, not heard"..it's the way we were brought up. Tough, one may conclude today, but that is how it teaches us respect for your elders compared to what one sees today.

To put into perspective, the man was jobless, mom was a housewife having resigned from her nursing carrier after marriage, with 3 kids schooling and soon to vacate the big government quarters in Jalan Young. Sure did not look good by a long shot. But that was another phase in life.

When I was growing up till I was about 10 years old, I lived a privileged life. I and my sisters had personal 'chinese amahs' to care for us. We were then staying in a government bungalow at the back of the old Istana Negara. We used to play on the hill slopes in the cool pristine dawn where ferns with dew and fine spider webs cover the ground. When I started primary school at Batu Road School, I had a rickshaw puller who pulled all way from Kampung Attap to Batu Road to and fro 5 days a week, come rain or shine. Wearing shots and not even shoes but some foot ware that looks like Japanese slippers. They were actually stripes of old tyres tied together. He never showed any anger and always had a smile on his face. When school is over, he was there looking out for me. As I write this today, I can still visualize his face, wiping away the dripping sweat or dripping on his poncho during the rains. I now wonder who his children are? Maybe for him, that's life. I feel his pain. I hope he had a good life. He pulled the rickshaw for a year and changed to the new pedalling trishaw.