Mahthir is back with a vengeance. A combative, focussed and even more committed Mahathir than the original Mahathir that we knew from the twenty two years when he was our prime minister. Woe betide anyone that thinks themselves capable of crossing swords with him and surviving ....though there seems to be no lack of Pak Pandir's who think themselves capable of doing so. Fools who do not know better and those who think themselves Don Quixote - unable to discern myth from reality, and suffering from delusion of grandeur because of their accidental position in life and politics  - unearned and undeserved - and there are many of them in government and Barisan Nasional! They will all have a go at the old man! All of them, without exception, have fallen by the wayside. Why would I think that those whom Mahathir now choose to do battle with, are different?

And now Anwar is with Mahathir and Mahathir is with Anwar. 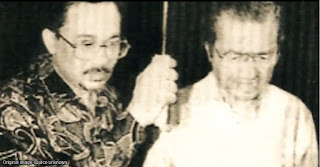 Do not ask me why they are together, do not try to qualify, quantify, clarify, glorify, justify, nor should anyone try to falsify this union. We are not privy to their inner most thoughts. It is enough that they are both together to fight our fight.....and make no mistake about this....it is OUR fight!

My hope is that Mahathir and Anwar understands this as well as we do. From the time when both were at their very best in their service to King and Country...these two have not fail us though I will not forget that both of them have at times failed us at times as human beings... but they have not failed us as Najib has failed us. As those within Umno has failed the Malays and many many Malaysians!

Umno has been used and abused by too many Malays for it to survive in its purest form. What is left of Umno is only a corpse...bangkai...and what is left within Umno are the maggots and worms that feeds on its rotting flesh....and soon they will begin to feed on the very carcass that now is Umno...Najib and all those Malays who have become obese with the insane wealth that they have fed on in their time in Umno.

I know enough of what Mahathir and Anwar have done in their time in government to know that if given half the opportunity...they will both go back to the old days when political power allowed those who have it, to do as they please. As Reagan says....'TRUST BUT VERIFY". I will only be comfortable when check and balances are in place to ensure that politicians will have to answer for any abuse and use of political power for their own advantage, in Parliament.

Email ThisBlogThis!Share to TwitterShare to FacebookShare to Pinterest
Labels: mahathir and anwar