Quote "When I came to Malaysia, corruption was a crime. Later it became acceptable. Now it is legal. I better leave before it becomes compulsory!" 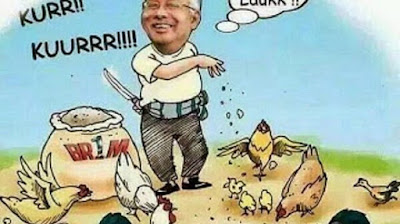 My last posting "Life is Brief" is dated 19th June 2017. Since that date I have kept myself as far away as I can from blogging - physically, mentally and in all other aspects as is humanly possible and that, by way of explanation, is why I have not responded to any queries or comments from any of my friends asking why I have not posted my rantings and comments on what is happening back in K Hell. I cannot adequately explain my need to do so...but suffice for me to say that all my senses having to do with blogging was on overload. ...and possibly I needed a circuit breaker to jolt me back to being steadyaku47 again. There weeks away from the madness in K Hell may do the trick. For now I will have to get myself back into the grove of being a blogger that I was.....one who blogs daily on matters that matters to me....and that, at best, will take a couple of weeks to do so....at worse, never. Time will tell.
Last night I scrolled through my whatsapp messages that has banked up over these last few weeks and saw the above "quote" about corruption in Malaysia, from a foreigner and what he had to say about the state of our nation tells all of us what we already know....that maybe corruption has become instutionalized to such an extent that legalising corruption is a fait accompli:


fait accompli
ˌfeɪt əˈkɒmpli,French fɛt akɔ̃pli/
noun
Truth, as they say, is always stranger than fiction....and the truth is simply this...the Malays have allowed their leaders to institutionalised corruption. The Malays have done so not just by looking the other way and not only by closing one eye and shutting the other....but more disturbing... they have embraced the spoils of corruption with an enthusiasm that defies any logical explanation that their culture and racial profiling can ever hope to explain.

And now the Malays are doing the same to Islam.

The union of the religion of the Malays - ISLAM - with the government led by Umno, is a fait accompli that threatens not only the individual rights of the Malays but of all Malaysians, and with that will be lost the credibility that Islam has... as it becomes a tool for politicians to use to advance their own financial agendas.

Corruption and religion, are synonimous with the descend of the Malays from the position of "ketuanan" that they have once assumed to be deservedly theirs to what they Malays are today in Malaysia : a people desperately trying to find their place in a corrupt nation wrecked by religious zealots and opportunists who seek financial gain in everything that they do.

The right and wrong of all this will depend on which side of the political fence you happen to be. It will depend on whether you see Riza Aziz as a worthy Malay to by emulated, Rosmah Mansor as the Malay mother under whose feet you would find syurga or Najib as the Malay father figure you would prefer to worshipped and revered. Or would you rather have Mirzan Mahathir as your Malay business mentor, Mahathir as your Malay father figure and Siti Hashmah as the mother you would be ready to die for. And then there is Anwar Ibrahim, Azizah and Nurrul to be considered as ....but what is true for the Malays is that, alas, in a country they call their own, a government they know is of their own kind and in a religion to which they have hoped to be guided by....much is lacking simply because the Malays are willing to be dictated to by elements within government and religion that seek to further their own personal financial and political advantage rather than that of the Malays.

In dealing with these realties I have to take my own race to task for the state of our nation today...not just Najib, not just Umno and not just the Muftis and Islam....but almost every Malay that has voted Umno because it is a party of Malays. Almost every other Malays who has chosen to be preached to by the religious zealots in Islam who are doing the bidding of their political masters simply because that is where their periok nasa resides. And all those Malays is really a lot of Malays for me to upset. And being a Malay myself does not make it any easier.