So tell me....do you really want Anwar or Mahathir to once again lead this country?

When you are prime minister anything you want and every wish you uttered are catered to immediately by those who are tasked to do your every bidding. Seri Perdana is where you go home to after a hard day at the office.  Your image is plastered all over the nation, and everything you do is reported in the main stream media, television stations and spoken of by many. You begin to believe in your own invincibility. You begin to believe that you can do no wrong, break no law. You begin to believe that you are indeed the heartbeat of your nation, the very air your people  need to live. You really believe that in you resides the hope of your people, the future of your nation and that you are the very essence of all that Malaysia is.

Mahathir, Anwar Ibrahim, Abang Lah, KJ, among others, are people who are still around who would be able to understand and relate themselves to what I am saying...to what Najib is now experiencing. You begin to think that not only can you be God, but you can also speak as God, do as God and soon, God willing....you will be God!

And if you are the wife of Najib Razak you can, if you want, be Cleopatra, Queen Victoria, Joan of Arc, Margaret Thatcher and the most beautiful first lady of Malaysia all at once ...even if in reality you are an old fat hippo bitch who is height challenged! 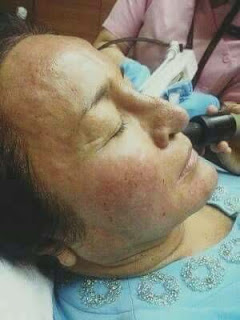 Mahathir, Anwar, Abang Lah, KJ and many others of their genre have all had political power and then tasted humble pie. Some of them have wallowed in humble pie for many years since their fall from political power and are still up to their necks in it......but political power once tasted have a tendency to make one believe that what was once yours can still be yours again if circumstance and timing can be made to work in your favour....and so covertly or overtly they continue to pursue what they think is rightfully their right to once again be leaders of a country that no longer wants them and a people that has had their fill of them. Good luck to them. Nothing you or I can say will make they think or do otherwise.

What would be an interesting exercise for us, is to watch closely the fortunes of Najib Razak and Rosmah in the coming months.

Why in the coming months?


Anybody with half a brain (which covers most of who really do have half a brain!) can sense that Malaysia is now being pulled asunder by the blunders of the many contenders who are now vying to remain, or continue to be, the numero uno in Putrajaya. The time when each of them will be held to account and ask to account for what they have done in the name of political expedience  - whether for our benefit or for their own - draws near.

Let us ignore those hangers on and those sad sub-humans whose periok nasi hangs on the fortunes of their chosen leaders, for these dregs of society will always be there no matter what happens. I am no longer persuaded by the utterances of politicians who are eager to play to the crowd that stands before them nor will I hold them to what they promise or put down on paper for the very same reason because the compulsion to say anything in order to advance their political interest is too overwhelming for these politicians to ignore. All these things considered....short of Najib taking government by other means than a general election...we can be assured that a general election will take place in the coming months.

And in a general election where Umno can no longer with certainty, decide on it's outcome, it will be you and me, who will decide.

Whatever the outcome of this coming election we will indeed see change, for once awaken, the people will not be prepared to lie down again until these corrupt, self serving and arrogant leaders and their underlings are arrested, prosecuted and punished for what they have done in the name of government.....and I for one, will want to be in K Hell when that times comes. 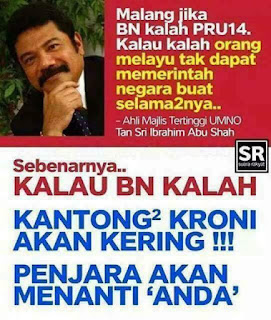 Do not think that these thoughts are not uppermost in the minds of Najib and Rosmah? Every brand new day brings hope to many Malaysian that their beloved Malaysia will soon be rid of the cancer of corruption and the bane of arrogant and self serving politicians...and yet that same brand new day brings dread to many politicians as the reality of having to account and be responsible for the things these politicians have done while serving king, country and it's people while in public office, nears.

But these are all conjectures that we ask ourselves in moments of reflections and we will not share with anyone the real answers we give to ourselves. But the truth is this...these politicians live their lives on the promise they made to us of what they will be once we give them political power....and having been given that political power....they have failed us. Mahathir, Anwar, Pak Lah, KJ, Najib and many others have failed us in various degrees. So for those who live by the sword, it is fitting that they must die by the sword.....and for each and every one of them, they all know that their political lives now lies "dihujung pedang!". I will not beg for mercy for any of them. The spoils of political office for every one of them has been insane - wealth beyond their wildest dreams - and so when the time comes for them to take responsibility for their deeds, they and they alone will have to answer for what they have done....they and what their fancy and highly paid lawyers hired to defend them, will do to save their skin.

I can promise you that that time will come. It came for Marcos, for the Shah of Iran, for Idi Amin, for Saddam Hussein and Gaddafi....and it will come for Najib and Rosmah and for all the others who have been responsible for the state of our nation today. Until then let us watch them unravel and see how they prepare themselves for the fate that awaits them : With courage or with fear? With utter contempt in the mistaken belief that they are beyond the long arm of the Law or with trepidation and despair as they see their world crumble around them? Saddam Hussein in his final hours was strong and courageous to the very end. Gaddafi was not. Already within Umno you see the start of it's fall into an abyss of self destruction that will take many many years for Umno to recover from ...if recovery is at all possible. Maybe from the ashes of Umno will rise other Malays who will understand the need to work with other Malaysians to make the Malays, Malaysia and other Malaysians strong again. Maybe not....but one way or the other...there will still be a Malaysia....maybe bankrupt, maybe a failed nation...maybe a Malaysia hopelessly embroiled in racial, religious and political conflict....but it will still be our Malaysia....and we will have to live with that Malaysia to the best of our ability or die trying.

Email ThisBlogThis!Share to TwitterShare to FacebookShare to Pinterest
Labels: malaysia, State of the Nation