Murad Abdul Khalid : There is a man near my house working in BNM of equal status with murad.He said this murad is worst than pig.Babi pun ada gunanya 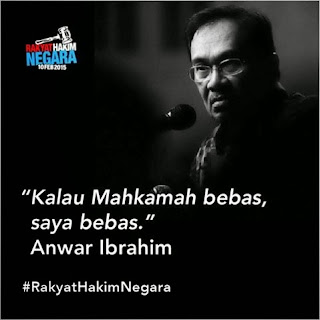 PRESS STATEMENT
I remain very concerned that I am not allowed to be present during the proceedings of the Royal Commission of Enquiry into the Bank Negara Malaysia (BNM) Forex losses despite repeated requests by my lawyers based on the fact that my name has been mentioned a number of times by certain witnesses.


I am without question a person who is “ concerned” with the proceedings of the Inquiry as provided for under section 18 of the Commissions of Enquiry Act 1950. Yet I am only able to follow the proceedings with much difficulty through limited contact with my lawyers at Penjara Sg Buloh.
I have read the witness statement of Dato Murad bin Abdul Khalid where at paragraph 37, he alleges that on a flight to Hawaii in early1994, he briefed me on the BNM forex losses and that I had said that if those losses were made public, I would have to resign as Finance Minister. His malicious insinuation is clear – that I had implied a cover-up was needed.
That allegation is false. I never said that to him. I should stress that there was no need for me to say such a thing to a functionary like Murad who was sent by BNM Governor Tan Sri Jaffar Hussein to brief me on technical aspects of the accounting done by BNM and the contents of their annual report. I must stress at all other times I dealt directly with Tan Sri Jaffar.
I had already been dealing with the issue of the BNM forex losses since April 1993 when I was replying in Parliament based on figures and information in BNM’s published 1992 report and their briefings to me. I did the same again in Parliament in April 1994 based on BNM’s 1993 report and their updates to me.
Murad has been personally hostile towards me since 1999 when he published a sworn statutory declaration making false and scurrilous accusations against me. This declaration was investigated by the then Anti Corruption Agency and found to be completely baseless. A High Court judge affirmed these findings and said “the declaration had been discredited” when he ruled in my favour in my libel suit against the New Straits Times which wrote an article referring to the declaration.
I will reiterate these statements to the Commission when they will call me as a witness to assist their enquiry. I say “when I am called” because I would consider it quite unjust if other witnesses are allowed to make prejudicial allegations against me in front of the Commission and I am not allowed to make my response to them in the same manner.
Anwar Ibrahim
24th August 2017

comment : MCKK Class of 64.
Malaysian system of justice; You lock-up somebody, especially your enemy, pay someone and encourage/induce hom to spurt lies on the victim, deny him to rebutt and blast in your media of how immoral the victim is. But man proposes Allah disposes and I have FULL faith in ALLAH's justice...DFR

Murad was in tears when he apologized re his SD about Anwar Ibrahim having 4b stashed in banks. Now an about turn and you know why...YBKB

Dah dapat dedak dari org nak jumpa trumpet.There is a man near my house working in BNM of equal status with murad.He said this murad is worst than pig.Babi pun ada gunanya. AA