Nine state sultans urge to reopen investigations and for 'appropriate and stern' action to be taken, mounting the pressure on Prime Minister Najib Razak to explain the mysterious funds in his personal bank accounts
PUBLISHED : Wednesday, 07 October, 2015, 12:56pm 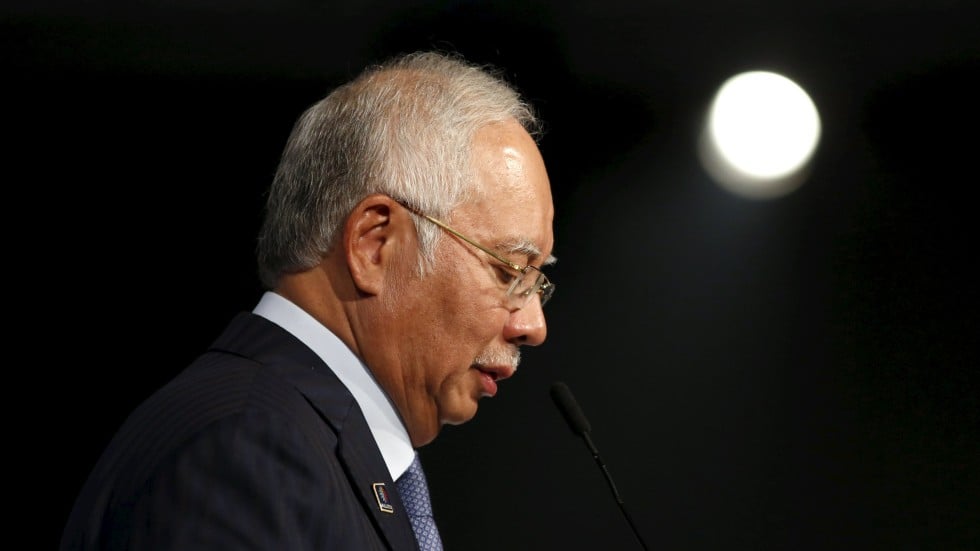 Daulat Tuanku...May I respectfully suggest that all nine of you go probe that part of Najib's self where the sun does not shine...and while you are all at it....go probe the Flying Hippo too! Daulat Tuanku!

Malaysia’s nine state sultans have issued a rare joint statement expressing concern over a corruption scandal swirling around Prime Minister Najib Razak and calling for a swift and transparent investigation.
The statement issued late on Tuesday ahead of a two-day annual royal conference adds to mounting pressure on Najib, who is facing calls to explain huge missing sums at a state-owned company he founded as well as nearly US$700 million in mysterious transfers to his personal bank accounts.
The revered sultans called for stalled Malaysian investigations to be revived and “appropriate stern action” taken.
The hidden costs of China’s lifeline in the 1MDB scandal
“The findings of the investigation must be reported comprehensively and in a transparent manner so that the people will be convinced of the sincerity of the government, which shall not at all conceal facts and the truth,” the official Bernama news agency quoted the royal statement saying.
Domestic investigations have been essentially shut down since August after Najib replaced his attorney general and others scrutinising the affair.
But probes into alleged money flows across the globe have reportedly been launched by authorities in the United States, Switzerland, Singapore and elsewhere.
Anwar and Mahathir kiss and make up, what happens to Najib?
“The failure to give convincing clarifications and answers is feared to have resulted in a crisis of confidence,” the sultans’ statement said, referring to a plunge in the value of the ringgit currency and other market turmoil blamed in part on the scandal.
A parliamentary democracy, Malaysia has a unique system in which Islamic sultans serve as the ceremonial heads of nine of the country’s 13 states, alternating as the nation’s figurehead king every five years.
The sultans have no formal power, rarely dabble in politics, and their proclamations are not binding.
Why a resurrected Mahathir Mohamad is Malaysia’s best hope
But the centuries-old royal families are accorded great respect as symbols of Muslim-majority Malaysia’s heritage and guardians of the Islamic faith in the country, and the statement is likely to add to pressure on Najib.
They opened their yearly Conference of Rulers on Wednesday.
Najib, 62, has faced growing calls to resign over claims that huge sums of money had been siphoned off from state-owned development company 1Malaysia Development Berhad (1MDB), and the revelation in July of money transfers to his bank account.
Will China bail out Malaysia’s 1MDB? At what cost?
His government calls the money “political donations” from Middle Eastern sources but has refused to provide details.
Both Najib and 1MDB vehemently deny wrongdoing.
Analysts say Najib looks unlikely to be ousted as he retains a strong position in the longtime ruling party, which he strengthened in July by purging his cabinet of members who had demanded transparency in the scandals.

This article appeared in the South China Morning Post print edition as:
Sultans join chorus of concern over 1MDB
Posted by STEADYAKU47 at Friday, August 11, 2017