cakap cakap, my wife, Sirul and other things.

My wife is not feeling to well this morning. She has a runny nose, fever and falling asleep even as I was trying to give her breakfast this morning...but she was awake the whole time during her "cappuccino" break. She loves that stuff.


I woke up late this morning...after 10 am and have spent all of this morning sitting by my wife's side, holding her hand and making sure that she is comfortable as I can make her while she drifts in and out of sleep. A few minutes ago I got up and got myself a Bic and paper and started to write this....still sitting beside my wife and listening, at the same time, to the wind blowing/whistling outside.


I want to write because even as I am concerned about the the condition of my wife, I know that as long as she is resting , I can write.....write about what has been happening these last few weeks.


Two weeks ago, after a long break, I wrote again about Sirul. This is what I wrote in cakap cakap...najib, umno, Mahathir dan lain lain" posted on 1st August 2017

Let me talk about something I know...about something that I have been doing work on. About Altantuya and about Sirul. Whether it be a civil or criminal matter, the case against those involved in Altantuya's murder is proceeding. There will come a time when Najib will have to stand in court to answer for his part in her murder. As for Sirul now in detention in Villawood in Sydney...for now at least...Najib has him isolated, without a voice and Sirul will keep quiet for as long as he thinks Najib will still be prime minister of Malaysia and he will still be able to get something out of Najib. Now ask yourself what Sirul will do if Najib is no longer prime minister?


And then another piece the next day  - 2nd August, which is self explanatory :  It's  official : Sirul will Rot in Villawood! In which, among other things, I wrote :


And now, many months past, Sirul has received an official letter from the Australian Immigration Department refusing to give him Bridging Visa E...ie a protection visa that will allow him to be released into the Australian community., because he is NOT of good character....so now, rot in Villawood he will!

And Amen to that!


And then  yesterday, 9th August, The Australian posted this : 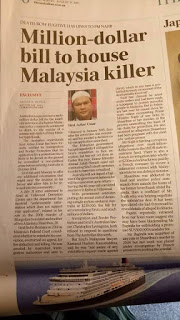 In short, ten days before this story broke, I started to "work" on Sirul "case" again after a long break....and since that story broke in The Australian yesterday, there have been many many posting by many other - from the Sarawak Report to bloggers in K Hell etc etc ..all about Sirul!

I made a conscious decision today not to write any more on this matter (except here!) until I know where I can go with this Sirul matter. ....and where I want to go  is simply this : get the truth and nothing but the truth. This might take a day, a week or maybe more....let it take as long as it need.

And now, on to other matters....matters important to me (though many of you will disagree!).

Yes my wife is unwell....and when that happens, everything I do is towards making her well again. For now I do not think there is a need to get her to a doctor  because it is Winter and getting a cold, a runny nose and a slight fever is par for the course in Winter (as golfers would say when something happens during their game of golf which is part and parcel of playing golf).

This is NOT par for the course!

I am all rugged up for Winter and so is my wife...so we will wait for the cold to blow over in a few days time. And it will....I hope.

This morning after taking the rubbish down to the rubbish room downstairs, I got into a shouting match in the lift with a huge guy who was off his head on some "medicinal compound"...aka cannabis, heroin or something in between. Normally I ignore them as they do not know what they do because they are "off their head". ...but this time around when he started shouting/yelling at me, something snapped within me and I shouted/yelled back at him louder then he was shouting/yelling at me. It felt good and it shut him up....but I was relieved when the lift doors opened to my floor and I left him alone in the lift.

It is now almost 2.45 pm. and I have been sitting beside my wife since lunch at noon. Anyone who is 70 (like me) will know that physically, there is just so much your body can do before it tells you to take a rest...which is what I am doing now....taking a break and transcribing what I wrote on that piece of paper onto my blog...and as soon as I finish this...I will have my lunch.