Why RPK is 'The Man' 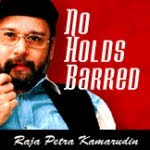 Farah Azlina Binti Latif, one of the Federal Counsels of the Trial Unit of the Attorney-General’s Chambers who is on the prosecution team in the Anwar Ibrahim Sodomy 2 trial, is having an affair with Mohd Saiful Bukhari Azlan.


NO HOLDS BARRED
Raja Petra Kamarudin
There was a joke I once told back in 1998, which went as follows:
Who wanted the Olympics to be held in his country, wanted to build the tallest tower and longest bridge, wanted to build a national car, almost bankrupted his country, quarrelled with the west, hated the Jews, coined the slogan ‘kita boleh’, and accused his number two of being a sodomite and sacked and jailed him?
Yes, that right, Adolph Hitler. What did you think I was going to say?
Anwar Ibrahim went through Sodomy 1 back in 1998. Ten years on, in 2008, he faced Sodomy 2. But while Megat Junid Megat Ayub was the ‘team leader’ of Sodomy 1, for Sodomy 2 it is Shafee Abdullah, the lawyer notorious for fixing court cases a la Lingam.
In the article ‘Money, power and sex: what motivates man’ I wrote as follows:
Some people are puzzled as to why Shafee Abdullah would go to all that trouble to fix Anwar Ibrahim on sodomy charges. He is worth RM70 million, they argue, and certainly he does not need the money -- whatever amount it may be that they have put aside for the special Black Ops against Anwar. And he has enough women in his life so sex can’t be the motivator as well. Okay, so we can rule out money and sex. But what about power? What if he is slated to be the next Attorney-General and whether he gets the job or not depends on how successfully he can neutralise Anwar and remove him as a threat to Umno?
(Read more here)
In ‘Shafee Abdullah: sodomologist extraordinaire’ I said:
That is why Senior Assistant Commissioner (SAC) II Mohd Rodwan Mohd Yusof did not meet Saiful in the police station or at the police headquarters. The special police operations centre is not in the police station or at the police headquarters. It is in the meeting room of Umno lawyer Shafee Abdullah’s law firm. So it would be dangerous to meet Saiful in this law firm lest someone finds out. That is why Rodwan met Saiful in room 619 of the Concorde Hotel.
(Read more here)
In ‘The real dalang behind the Anwar sodomy allegation’ I wrote:
Firstly, Saiful met Najib before the so-called sodomy took place. No doubt, at first, Najib denied meeting him and then later admitted meeting him but explained that it was for purposes of career guidance and to help the young man obtain a scholarship. Later on, Najib confessed he met Saiful to discuss the sodomy allegation against Anwar. This flip-flopping and inconsistency -- denial and then confessing only when it appeared like he could no longer deny it -- makes Najib appear like he is lying and therefore is trying to cover up an evil deed.
Now, the day after that, Saiful met Najib, he met Rodwan in room 619 of the Kuala Lumpur Concorde. Najib did not know this of course. Prior to that meeting, Rodwan and Saiful spoke over the phone at least eight times. We can only assume that part of this conversation involved asking Saiful to go meet Najib and to make sure that everyone knows about it so that the conspiracy points to Najib. The fact that Saiful brought a friend along only reinforces this assumption, especially when this friend is aligned to Anwar Ibrahim.
(Read more here)

Saiful Bukhari and his fiancé, Janna Mohd Zaki
Okay, those are excerpts from the three articles. And the argument that I am putting forward is that the Sodomy 2 allegation, just like Sodomy 1, is a fabrication and part of a political conspiracy to neutralise Anwar.
But this is old news, you might say, you want to hear something new.
Okay, how about this then?
Farah Azlina Binti Latif, one of the Federal Counsels of the Trial Unit of the Attorney-General’s Chambers who is on the prosecution team in the Anwar Ibrahim Sodomy 2 trial, is having an affair with Mohd Saiful Bukhari Azlan.
Yes, that’s right, Farah Azlina is bonking Saiful Bukhari. Have you ever heard of any other case anywhere else in the world where one of the prosecutors in bonking the key witness in what can be considered the most important trial in Malaysian political history?
Just when you thought Sodomy 2 is a most bizarre case it gets even more bizarre. I suppose, to save face, they might now have to say that Farah Azlina, Saiful Bukhari and Anwar Ibrahim were all in it together and that they indulged in group sex or orgies.
Let’s see what happens from hereon. Will Farah Azlina still be retained in the prosecution team? Who she bonks is her business. But since Saiful Bukhari is the man who is going to testify against Anwar, then this would be conflict of interest of the first degree.