WIth thanks to Brother ANTARES...and Mariam Mokhtar a good read.

As a special service to those who can't afford a Malaysiakini subscription or who may have missed this, I'm reproducing a well-crafted and important essay from Mariam Mokhtar...

Altantuya and PI Bala: A story that won't sink 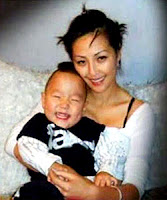 People want to know about the events that occurred in the months leading up to the murder of the Mongolian translator Altantuya Shaariibuu (left) in October 2006; but the investigation into her death was never intended to reveal the truth.

Those at the top realise that an inquiry helps to calm the public and presents a platform for disseminating the official version. Thus, the public never learns about the hidden web of political patronage, secret alliances and shared interests. 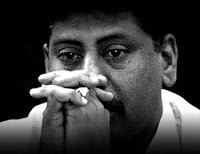 When the private investigator P Balasubramaniam (Bala) discovered that his testimony as a witness in Altantuya's murder was not revealed, and the evidence suppressed, he felt it necessary to make a statutory declaration (SD). His family was then threatened and his silence bought in order for him to retract his SD. The day after, he issued a sanitised version of the SD.

The press conference in London, on July 7, held by Bala and his team of lawyers, was supposed to be a platform to discuss issues raised during a scheduled interview of Bala by the Malaysian Anti-Corruption Commission (MACC). When the MACC cancelled at the last minute, their non-appearance generated more questions than answers.

When nothing new was reported at the press conference on July 7, the public reaction, gleaned from the feedback of the online news portals, was astounding. These ranged from indifference to incredulity.

Did they want Bala to produce the bullets which killed Altantuya? Did they really expect him to produce films of her body being blown apart in the jungle?

Maybe they should reflect on the various links that point to the top, rather than expect drama.

Amongst other things, the police recorded no less than five statements from Bala, but all the references to the PM have been deleted.

Why was Altantuya silenced?

Was Altantuya silenced because she pointed out that these submarines were faulty? Did she realise that we were paying billions for useless submarines? These deals were done when Najib was defence minister.

Alternatively perhaps, she overlooked serious defects in the submarines.

Later, during the trial for Altantuya's murder, Burmaa Oyunchimeg (right), Altantuya's cousin, read out a hand-written letter to the court that is believed to have been Altantuya's final note. It said, “is powerfull person, he have money, he have connection in police, in government. He trying to scare me, trying to kill me.” [sic]

If Altantuya's command of English was good, why would she write in pidgin English? Did she really write the message and has a handwriting expert verified this? Altantuya's cousin testified that she had seen a picture of Najib together with the dead woman. However, she was quickly hushed by both defence and prosecution lawyers and the picture has not been produced. Why?

Altantuya's immigration details were erased from the system. Who has that kind of authority?

After the press conference in London, Bala says that he has no regrets and that his conscience is clear. He did, however, express one disappointment: “Those working for Najib don't want the truth to prevail.”

Despite the crucial inquiry behind Bala's statutory declarations and the substandard submarines, we must not be distracted from seeking justice for Altantuya.

Altantuya's children and parents need closure. Bala and his family are forced to live in exile. They want to return home. And the Malaysians are demanding that justice is served.

Malaysians are wondering why so much of their money was wasted on these Scorpene submarines. In addition, the administration is seemingly dragging its feet in dispensing justice; the public are now demanding a change of government. 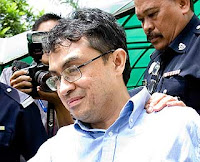 If Abdul Razak Baginda (right) had immediate access to the corridors of power, why did he need a private investigator, Bala, masquerading as a bouncer to protect him from Altantuya? Surely a quick phone call would ensure that Altantuya could be jailed for public disorder or harassment, or at worst be deported by immigration?

It is probable that the plan to kill Altantuya was conceived weeks before her death and involved a fall-guy, Bala, who was hired ostensibly to protect Abdul Razak Baginda.

It was reported that Bala and his assistant had already harassed Altantuya six or seven times after their arrival in Malaysia on Oct 8, 2006. There would have been telephone records or witness reports of Bala intimidating Altantuya. These would probably have been used against him in the trumped-up murder charge.

It is highly likely that this plan was poorly executed, with plenty of loose-ends. In addition, the unforeseen appearance of Altantuya's cousins and the underpaid taxi-driver, who corroborated the cousins' evidence, messed things up. Bala should consider himself lucky for he has escaped with his life, albeit one in exile.

Even if we were to ignore Bala, Najib, Razak Baginda, the submarines and the distasteful aspects of this case, we must not overlook the fact that one girl was killed in suspicious circumstances.

Who speaks for Altantuya? Who will avenge her death?

After the press conference, Bala was asked what he wished would happen next. He said, “I want the Malaysian public to know the truth.”

This case covers France, Mongolia and Malaysia; it has yet to reach its climax. If there is nothing to hide, then why are many things kept secret? It is an important question to which the Malaysian people have yet to receive an answer.

It is also a case that is worthy of Miss Marple.

MARIAM MOKHTAR is a non-conformist traditionalist from Perak, a bucket chemist and an armchair eco-warrior. In 'real-speak', this translates into that she comes from Ipoh, values change but respects culture, is a petroleum chemist and also an environmental pollution-control scientist.
Posted by STEADYAKU47 at Wednesday, July 14, 2010