"EVIL WILL TRIUMPH WHEN GOOD PEOPLE DO NOTHING : So good people....do something! 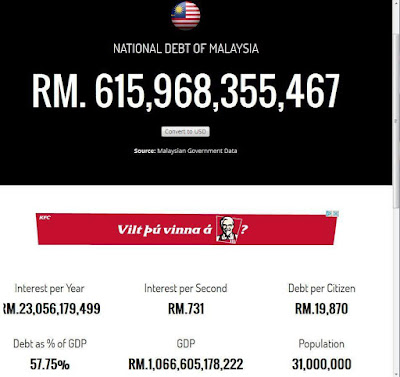 National debt has gone beyond that 615 b. If inclusive of "letters of comfort" and its likes; which indeed are letters of guarantees, debt figures are fast approaching 800 b. It is way beyond 52% of GDP as allowable by the constitution.

Though the national debt is scary, our leaders are spending like nobody's business.

This is why opposition members were always critical over unnecessary govt spending as it affects the future of our beloved nation.

The last time we paid our external debts was when our brother Anwar was Minister of finance. After he left there was NEVER a year debts were paid.

Now Petronas can only contribute 16 to 25 b per annum....APA MACAM?

"EVIL WILL TRIUMPH WHEN GOOD PEOPLE DO NOTHING!!"

Note : So says a classmate of saudara Anwar Ibrahim!


And this just came in from Canada:

On an annualised basis this will be RM1.6 billion.

In previous years, Petronas contributed 60% of the govt budget. But with a mere RM1.6b a year, where is Petronas going to get money to pay sizeable dividends of 30 or 40 billion to the govt?

Only 3 ways - cut jobs, shelf capex and marginal new projects, BORROW money, all of which augurs poorly for Petronas.

How will Najib plug the hole in the budget? Only 2 ways since there are no new sources of revenue - cut civil service & GLC staff cost by retrenchments (suicidal) and/or PRINT or BORROW more money which is hocking our future for short-term gains.

Either way, our economy is headed for disaster due to utter incompetence by the crook & fake masquerading as a 'Trained Economist'!!