Joseph Schooling : Only a Malaysian fought for him. His mom. 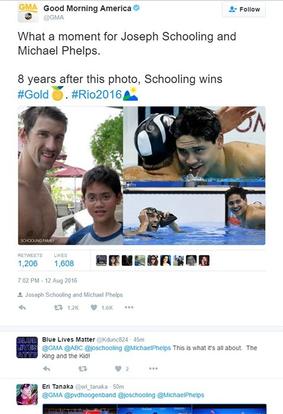 Fwd from a Singaporean retiree:

"As a nation, a people, a country, a govt., and as individuals, we did almost nothing to help Schooling get to the gold medal. We did not finance him, did not support him, the PAP choose not to groom and encourage this boy.

Very little of our money went to training him, and providing him the necessary support, compared to the millions we lavish on 3rd class athletes from China and elsewhere. Not only did we not support him, we almost killed his career by making him do NS. When I say we, I mean the 70% of the morons that supported and elected the PAP.

Instead, 2 angmos (one was his swim coach in University of Texas, Gregg Troy) and the other a technical director, Bill Swetenham of SSC, wrote in their support to ask for his deferment. Not one PAP asshole or Notable sinkie stood up for this boy.

But now that he won the Gold, everyone wants to jump on the bandwagon and be proud of him. I say that you don't have that right. Singaporeans have not earned the right to claim the limelight with him. Where were they went he needed them? Sinkies are really pathetic hypocrites.

Although I am born and raised in singapore, I am ashamed of our treatment of this boy, and I certainly cannot rejoice without a hint of embarassment that we as a people almost killed this great moment" Only a Malaysian fought for him. His mom.
Posted by STEADYAKU47 at Friday, August 19, 2016