The Umno and government that Najib Razak leads mirrors the Najib we know. A litany of individuals who also fills us with disgusts, contempt and loathing in the things they say and do in the name of government.

There are many many things that you and I do not know about what Najib and Rosmah have done from the time that there were married.  Even less so of the time before they met and started fooling around with each other while both were married to others. But suffice to say that what we do know of these two, fills us with disgust, contempt, and loathing in the manner they have conducted themselves in their private and public life!

It is no wonder to any of us that Najib's fortuitous appointment as prime minister, courtesy of Pak Lah and Tun Mahathir, now burdens our people, our nation and certainly our future, with the dark and forbidding scenario of a Malaysia bereft of any saving grace that could possibly make the entrenchment of a criminal political elite totally, willingly and completely given to corruption in Putrajaya, somehow bearable for you or me.....and certainly not for Malaysians who now suffer the indignities of having a leader with, among other things, with RM2.6 billion in his personal account that he has not until today, given an accounting for.

The Umno and government that Najib Razak leads mirrors the Najib we know. A litany of individuals who also fills us with disgusts, contempt and loathing in the things they say and do in the name of government. There is no need for me to expand on this as you and I know too well that Umno today consists of greedy Malay politicians pigs with their nose to the trough partaking in the spoils of corrupt politics. And Government are today stacked with officials  complicit in giving credence to Najib's utterance that "Cash is King!" 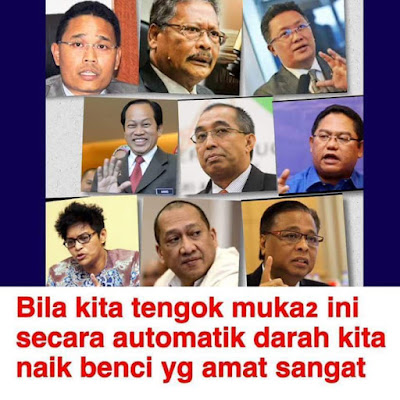 Such has been the total capitulation of Umno and government to Najib;s corrupt ways that those who seek his removal from office have now resorted to beseeching foreign governments to take action against Najib and his cohorts for what they have plundered and pillaged from the coffers of our nation's coffers....pillaging and plundering that has now run into the many billions of ringgits!

This is because whatever check and balances previously in place to prevent the use and abuse of political power for personal gain have been rendered helpless or are now complicit in the promotion and encouragement of money politics in Malaysia. This includes the Police, the Judiciary, and even the religious authorities any other conceivable authorities that were once the guardians of the Rakats safety and well-being. All corrupted to the core.

I say this because we need to acknowledge what is now happening in our country...and acknowledge it publicly and loudly so that not only our people would know, not only the world would know....but that also those who are doing this to us - those criminal political elites of BN and their cohorts - will also know!

You chose which side of the divide you want to be....and nothing is off limits. This fight against the criminal political elites is a double edged sword. It cuts both ways. I can only relate what I have personally experienced.

For the well-being and comfort of my family, I chose to leave Malaysia and live in Australia.  For now, I will not visit Malaysia nor can I think of returning because if I do so I will be a "person of interest" to the police. What an irony when my late Father retired as Director of CID under Tun Haniff! I blog from Melbourne but in my blogging various ways and means have been used against me to deny Malaysians access to my blog and to make it difficult for me to blog. There are other stories I can tell but for now, this will do.

But my "difficulties" are nothing when compared to what Anwar Ibrahim and countless others have to face in Malaysia. Harassment, physical harm, imprisonment and some even death! And now we have the spectacle of Tun Mahathir, a man in his nineties, leading the fight to oust Najib Razak and all that he represents!

Each and every one of you knows all this and more.

Why not today.... this evening...sit down and contemplate what I write here. Make your own list and write down your thoughts and ask yourself what you can and must do to bring about change in Malaysia. When you put down on paper your thoughts then things starts to get done. Try it and share your doings with friends and acquaintances....on FB or a blog if you have one. Send me your ideas and your writings and let me share them with  our other friends through this blog.