The rich, political powerful Malays : What will become of them soon? 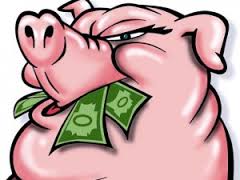 There will be many rich Malays, politically powerful Malays, Malays in high public office, Malays in  the government, in the Judiciary, in PDRM and in many other positions of high office and even higher (so they claim) religious office, who will be called to account for what they have done over and above the duties they are tasked with...to account for the manner they have conducted themselves to serve their own vested interest : that of the acquisition of material wealth far, far beyond their means. 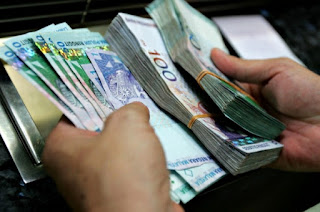 And against that you must weigh the forces that are now marshaled to bring these odious perpetrators of greed and corruption to justice.

Start with Mahathir and Anwar Ibrahim.

If you tell me that in my lifetime I will see Mahathir and Anwar in the same room....and not only in the same room but being there willingly and then to see them shaking hands and talk about working together as a team again for what ever reason. I would say "Never!".

For whatever reason, political or otherwise.....they are together again. 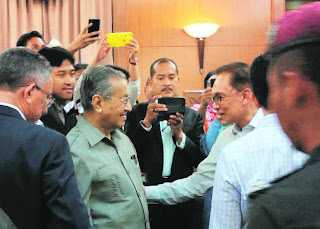 And of course there are the others : Mahyuddin, Kit Siang, Lim Guan Eng, Mat Sabu, Husham, Zaid and a host of others who once stood on opposite ends of the political divide - all now together and reconciled ready to work together against bn, umno and najib razak.


Now if that is not enough to make umno, bn and najib wonder what has cause such an array of conflicting political ideologies to band together against a common political enemy....then maybe they should also ask themselves what else is against them?


Listen to the ever increasing questions being loudly asked by those who have served their nation bravely with the best years of their life - some speaking for themselves and some speaking for their comrades that have laid down their lives for King and country. Listen to what they have to say.

This Dato' holder of the Pingat Gagah Berani asks:


KAMARUDDIN MOHD. JAMAL : IS THE LOYALTY OF OUR ARMED FORCES WITH THE GOVERNMENT OR THE PEOPLE?

Another old soldier, again another Dato' no less, sends an open letter to the President Armed Forces Veteran Association. :

An open letter to the President Armed Forces Veteran Association.

And what of the Rakyat?

I may live in Melbourne but I am still a rakyat of Malaysia.

I have been working against bn, umno and now against najib for close to a decade. I have over 9500 posting on my blog, over 13.3 million hits to date and yesterday got 50,325 hits on this blog. That is just me.  There are many others like me with more hits, more postings and closer to the front line that me - and they are all focused on removing umno, bn and najib from office.

And a host of other sites that are all, without exception, working diligently, with focus and intensity towards releasing our beloved Malaysia from the greedy clutches of umno, bn and najib.

Any one in umno, bn and even najib and those with half a brain can work out for themselves that Armageddon is coming for umno, bn and Najib, Justice beckons, conviction is certain and Sungai Buloh and the other place where they themselves have thrown many innocent others for no reasons other then that they are a threat to their corrupt hold on political power....these places will soon be their place of abode.

And most of them who will be incarcerated there will be many rich Malays, politically powerful Malays, Malays once in high public office, Malays in  the government, in the Judiciary, in PDRM and in many other positions of high office and even higher (so they claim) religious office, who will all be there because of what they have done to serve their own vested interest : that of the acquisition of material wealth far, far beyond their means.

And we will all say "AMEN" to that!