cakap cakap : They should all be charged with treason!

I am thinking of the two pastors who have vanished from the face of this earth. Gone!


Today there is much that is wrong in Malaysia.  But more that the corruption, more that the abuse of politics for financial gain, more than the incompetence and utter lack of grace by our leaders in the bn government....more than all this put together.... for me it is the suffering of those who have lost their loved ones and those who are without their loved ones, that is truly tearing our people and our nation asunder!


We can overcome adversity. We can work through the hard times and be thrifty when money is scarce. The road tolls, the GST and the  rise and rise of petrol prices, we can somehow learn to live with. But how does one live one's life when a loved one is taken away from you  because your government failed in their duty of care towards your loved ones?

Teoh Beng Hock died unnaturally while under detention by MACC. Kugan murdered while under PDRM;s custody. And Aminurasyid was shot to death by PDRM while unarmed.

Anwar Ibrahim is in Sungai Buloh for sodomy - no one in Australia, America, Europe and in many other parts of the world are incarcerated for sodomy.

Harris Ibrahim and Rafizi Ramli have been convicted for sedition and for breaching the OSA respectively. This may be a crime under this umno led bn government of najib. Under another government after this bn government has been dismissed from office, these two will be hailed as heroes!

The disappearance of the two pastors is still to be looked into but we know that you just cannot kidnap a pastor and keep them hidden away if the police are doing their duty and the government not complicit in making religion a weapon of choice in their attempt to keep the  non-Muslims under their control.

Each of these unfortunate victims of this bn government have wives, children and families who will be affected by the action of this bn government. Affected financially and affected in many ways by the absence of their loves one. What excuse can anyone give to take a father from their own children, A husband or wife from their spouse? A son from their parents?   This, to me, is the most despicable thing that najib should be held responsible for when the time comes for him to answer for his deeds.

There will be scores to settle between Najib, Anwar, Mahathir and Mahyuddin. And with many others. Can you imagine what will be done to najib for what he has done to our people and our future? What do you do to someone who have committed political and economic crime on the industrial scale that najib has done? I cannot even begin to imagine what punishment will fit the crime of 1MDB and that RM2.6 billion donation! Oh yes najib tells us that cabinet has approved the use of the government jet for rosmah.Can you imagine what will happen should the opposition win the next election? Not only najib and rosmah will have to answer for what they did...but the whole damm cabinet and many others will be an accessory to what those have done and all should be charged with treason. 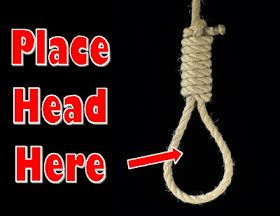