Winnow the truth from the facts.

The grains and the shafts are mixed together. The easiest way of separating the grain (the good stuff) from the shaft (rubbish) is to throw them into the air and let the wind do the job of separating them so that only the edible grains are left behind.

In Malaysia today truth, half truths, outright lies and an array of "facts" are being presented to us daily in different guises. Things are not what they seem to be. It is sometimes difficult  to discern what is truth and what is bluster. What is real and what is not.

Let me give you examples of this :


Fact : The Printing Presses Act 1948 has been repealed.
Fact : Yayasan 1MDB has sent pilgrims to do their Hajj.
Fact : Najib Razak is the legally elected head of Malaysia.
Fact : The BN government has assisted millions of Malaysians through BRIM.
Fact : The AG has cleared najib of any wrong doing re the RM2.6 billion found in his
personal bank account.
Fact : The murderers of Altantuya has been convicted by the Malaysian Courts.


All these are true....but dig a bit deeper and the real truth will be uncovered. You will find out that these facts do not tell us the true picture. Like the shafts that are mixed up with the grains, we need to winnow the truths from the facts. Lying, for this najib led bn government, has now become an art form...and they have all become good at it, good enough to pull the wool over the eyes of many of our people.


Yes the ISA 1960 has been repealed but it has been replaced by the Security Offences (Special Measures) Act 2012 which is more draconian than the ISA. In a similar vein, go through the above list and look at the facts....but do not stop there...look further and deeper at the facts as presented to you by this bn government and then ask yourself if the facts you see tells the truth...or are the facts and the truth they tell us, really lies meant to confuse and deceive the rakyat?

Just listen to our prime minister najib razak speak: all the right words, all the right way of saying it and all the right nuances to convey the "sincerity" of his message to the world and to all Malaysians, najib tells us that the bn government he leads care for the people and will "enrich their lives, providing them with dignity, the opportunity of raising their potential to share in growth and the fruits of growth". 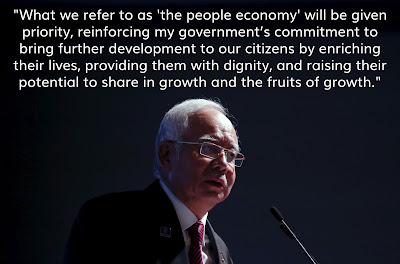 Instead of teaching Malaysians how to fish, thus feeding them for the rest of their life because they can now fish for their meals, this irresponsible umno led bn government would rather give them a fish and feed them for just that day....that way the hungry Malaysian will keep going to umno, cap in hand, time and time again for more handouts.


We have an anti corruption agency that does it work well....ahem...sort of. Has it not resolved that RM2.6 billion donation that the AG has already resolved? 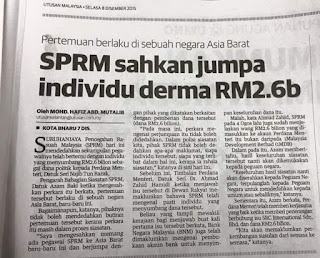 The people have been overloaded with so many facts that does not tell the full "story" that many of us are confused as to what are lies and what are truths....but that is the way that this umno led bn government governs, does it not?

Divide and rule. Confuse and bemuse the population and in the aftermath of all the confusion look for ways to blindside them with another "fact" and another "truth" which I am sure, upon closer inspection, will also be another lie. Another untruth and the end result is that we are once again deceived. So please my friends when this bn government present us with another true fact about Malaysia and about what they have done for Malayia and its people.....tolong kaji sikit and winnow the truth from the facts presented to you.

Things are not what they seem to be!

Email ThisBlogThis!Share to TwitterShare to FacebookShare to Pinterest
Labels: winnow the truths