Alice Cooper : How You Gonna See Me Now


Alice Cooper wrote this song for his wife. It was a tough time for him after he left the state hospital and his problems with alcoholism and the stress of fame. He and his wife Sheryl met on the road. He was also afraid she wouldn't love the man behind the "Alice" character. As it turned out, those fears were unfounded... They are still happily married after all of these years.﻿ 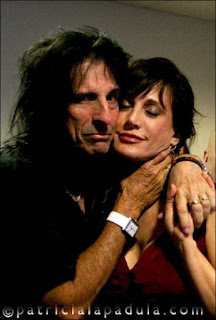 Alice Cooper has managed to hold on to the former Sheryl Goddard for 40 years. The couple were married on March 20, 1976 in Acapulco, Mexico.

Email ThisBlogThis!Share to TwitterShare to FacebookShare to Pinterest
Labels: Alice Cooper, How you gonna see me now, Wife