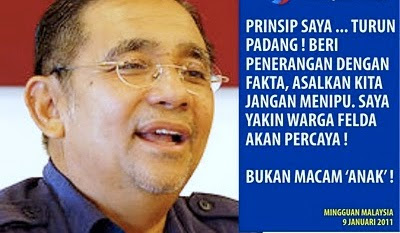 😡
There are many idiots in BN. Isa Samad, aka PENDEK, is one of them. Where was Pendek last Friday when God was giving out brains in Jalan Seamarak? Opps I forgot, he has been sacked as Felda's Chairman. He sure needs some grey matter in that cranium of his. Anyway, let me story him about why it no longer matters if he "ada kaitan atau tidak dengan Felda" when PH is in government.
What Pendek have wrecked upon Felda. with or without "help" from that Idiot who put him there, has costs Felda and our country billions of Ringgits - literally! How has he done it? Let me count the ways....

Hotels bought in Port Dickson and London to benefit Isa's son and friend.

What he has done as Chairman of Felda is treason because causing the financial ruination of our Nations, if not the World's, largest Oil Palm producer, is economic sabotage of our nation's economy.
The punishment for treason is death.
So Pendek, your "kaitan" with Felda stays and all the millions of Pounds you and your wife have stashed away in your London bank account is not going to do you any good once you are convicted of grand theft and treason!
Lest we forget...here are the seven corrupt charges of money politics and vote-buying in the 2004 umno elections that you were found guilty of:
1) Allowed his political secretary Mohd Salim Sharif to pay RM300 to each delegate from the Telok Kemang division to the Umno General Assembly on or about September 2004;


For all that he was suspended for six years and compelled to give up all his positions in Umno including that of Vice-President of Umno.
What about Felda?