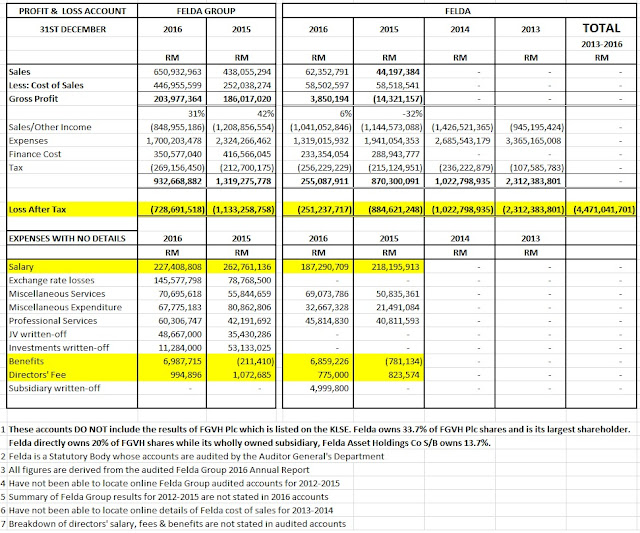 Please be clear that these accounts relate to Felda and Felda Group, which own 33.7% of Felda Global Ventures Holdings Plc (FGVH) listed on the Kuala Lumpur Stock Exchange. These accounts do not include the P&L or Balance Sheet figures of FGVH Plc.

Felda directly owns 20% of FGVH share capital while the balance of 13.7% is held by Felda Asset Holdings Co S/B, a wholly owned subsidiary of Felda. Felda Group is therefore the single largest shareholder of FGVH.

Felda accounts are statutorily audited by the Auditor General's Department (AG). For 2016, the AG has "qualified" the accounts by drawing attention to the continuous losses for the 4 years from 2013-2016, dangerous cash flow deficit and bank debt of RM9 billion, as follows: 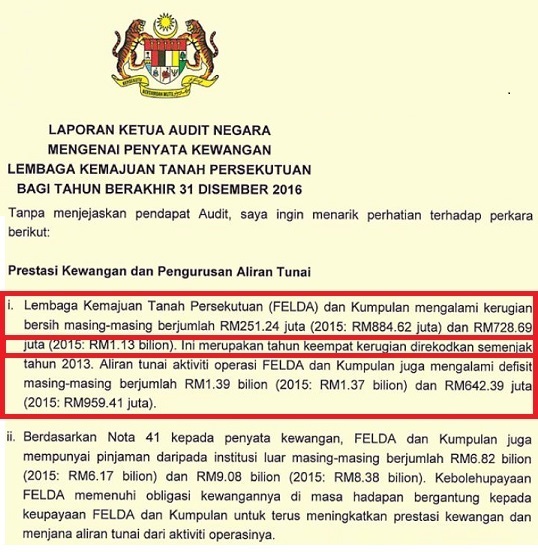 Felda lost close to RM4.5 billion between 2013-2016. However, the corresponding figures for the Group are nowhere to be found in the report. We can however assume that the Group losses are bound to be higher, probably about RM5 billion.

When Najib, who has taken on Felda as his pet project, suddenly announced the appointment of Shahrir Samad in January 2017 to replace Isa Samad as Felda Chairman, he did not outline the real disaster that had taken place at Felda. It of course reflects badly on Najib as a pathetic PM, as all top appointments to Felda and FGVH were made by him, and he has, through sheer incompetency and negligence, allowed the rot to set in at many a GLC.

The situation has taken a turn for the worse with MACC investigations having commenced over fraud allegations regarding  Felda's overseas and local hotel acquisitions, Jalan Semarak land in KL and other investments.

The detailed P&L shows that Felda's profits have also been dragged down by some RM12 million losses posted in 2015 & 2016 by its hotel division. Also, the 2015 Gross Loss of $14 million at Felda is a shocker! Shahrir's stated focus on selling assets like Maybank shares suggests he is clueless how to restore core business profitability.

Felda also has a big question mark over transparency on expenses, particularly:

Of concern too should be:
1. Investment in FGVH of RM4.7 billion whose market value is worth less than half its cost as the share price has tanked from its 2012 $4.55 IPO price to about RM2 currently, and as low as RM1.50.
2. FHVH RM1.69 billion in loans.
3. Dependency on FGVH for its lend lease debt of RM4.4 billion
4. Pretty stagnant palm oil prices plus threats of a EU ban.
5. Total bank loans and borrowings of RM9 billion, which will balloon further in 2017 due to the disastrous Eagle High Plantations, Indonesia (EHP) acquisition financed by a bank loan guaranteed by MoF!

Felda Group will likely see worse losses in 2017, given also its RM2.26 billion Investment in EHP which is now only worth RM620 million, a staggering write-down of RM1.64 billion in less than a year, and suspected to be a Najib fraud. Refer my earlier blog post. CLICK HERE.

The crux of Felda's problem is of course that of a half-past six prime minister with half-past six business acumen calling the shots, aided by political Chairmen appointees with even less business or  relevant management expertise.

I have said it before and I will say it again. Najib has the touch of the plague and the kiss of death about him. Everything he touches turns to dust and destruction.

When will UMNO/BN and the Malays learn not to allow mediocrity, incompetency and fraud to flourish?
Posted by STEADYAKU47 at Friday, February 23, 2018