Come Home Dad, RPK’s son pleadsRaja Petra Kamaruddin’s (RPK) son, Raja Azman is freed by the Magistrate Court today as the prosecutor failed to prove a prima facie of the case towards the accused.  Raja Azman was charged for stealing a motorbike and breaking and entering a home in Shah Alam last year.
Raja Azman expressed his relief and thanked God for the court’s decision.  “This could clear my f...
READ MORE...


When I started reading the first paragraph in Malaysia Instinct (MI) of this..…this drivel that masquerade itself as an article…. the first thing I did was to reach out for a container just in case I needed to vomit while reading the rest of the drivel… ..
How could the inability of the prosecutors to prove a prima facie case against RPK’s son for stealing a motorbike and breaking and entering a home clear RPK’s name for being a traitor to his country (well that is what the government is accusing RPK of being!)? MI quoted Raja Azman as saying “This could clear my father’s name!”
And this son of RPK  also “believes that his father is an honest guy and is never guilty of anything. With a good lawyer like Amarjeet Singh, who managed to get him out, his father too will have a 100% chance of winning any case.”.
Please note RPK…a 100% chance of winning a case! Better not let Amarjeet Singh see this - because I am sure Lee Liong Sik can pay more then you can because Liong Sik have much use of a lawyer that has a 100% chance of winning any case...and you will be left without a lawyer! 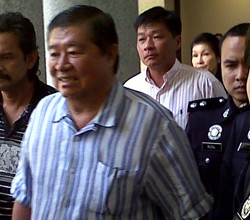 “After a failed suicide attempt by swallowing a razor blade, Raja Azman has now come to his senses.  He’s not going to make a fool of himself anymore” ………well I am glad that RPK son is not going to make a fool of himself because MI sure is making a fool of themselves with this kind of “licking the boots of Barisan Nasional” kind of writing
And of course Malaysian Instinct is also counseling RPK to not take the “ BBC’s cancellation of his interview on Hardtalk too hard.  It is just a bloody stupid program”. The same stupid program that Mahathir was on!
Oh yes….. religion too must be mentioned. RPK is an open minded, liberal devout Muslim who  Raja Azman sees “as a true, cool Muslim with a very open mind about the subjects of drinking and sex”.  …and that is why “ RPK is loved by the liberal Malays, or the better Malays, as RPK referred them. MI states that the ordinary Malays are “plain stupid and less smart”. Their words not RPK, not mine.

All it takes for our country to descend to the lows and unmitigated despair of a tin pot alley African despot ruled country is to keep quiet when we read articles like this. All it takes for evil to triumph is for good men to do nothing…and too often we are doing nothing. I have tried many time to sit down and write these kind of drivel about Barisan Nasional leaders just so that I can post something on to my blog  - but I find that it is not possible – not unless what I write can be believed and its credibility confirmed with things that these idiotic Barisan Nasional leaders have already do.
But then there are all sorts of people in this world – just as there are all sorts of writers in Malaysia. Let us hope that like BN linked media  Malaysia Instinct will eventually see the light of day and there will be people within its organization that are able to understand the difference between what the public wants to read and what the BN politicians wants the public to read.
But I am sure the writer of that piece is already wallowing in the back slapping and congratulations he is receiving from like minded dick heads…who knows he might already be ear marked to head the Malay Mail, NST or, heavens forbid, TV3! Oh dear God please help our country for our government surely will not!
Posted by STEADYAKU47 at Friday, September 24, 2010