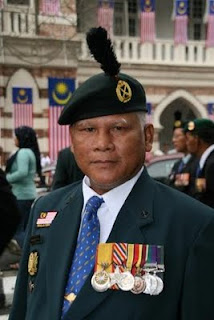 Warrant Officer 1 (901738) Kanang anak Langkau
Kanang anak Langkau of Simanggang, Sarawak was a Malaysian Ranger from the 8th Battalion Royal Rangers (now known as the 8th Paras) is the first and only living recipient of both the "Seri Pahlawan Gagah Perkasa" and the "Pingat Gagah Berani." He is the first and only person thus far to have received two gallantry awards in the Malaysian Armed forces.
He joined the service with the Sarawak Rangers as an Iban Tracker on the 21 April 1962. He was absorbed into the Malaysian Rangers when Malaysia was proclaimed on the 16 September 1963. He retired as a Warrant Officer 1 after 21 years in the service.
Following the death of one soldier in the Tanah Hitam area of Perak in enagagement with communists on the 8th February 1980 the Unit Combat Intelligence Squad (UCIS) of 8th Battalion Royal Rangers under the leadership of Kanang anak Langkau was tasked to seek and destroy the group. They tracked the enemy over 11 days on terrain familiar to the enemy. On the evening 19th February 1980 at around 1500 hours his platoon managed to estimate the location of the enemy, who were close by.
Unfortunately, Kanang's group was mistaken as they were already within the enemy's perimeter, which they realised when they found a communications cord connecting the sentry outpost to the main force. The cord was usually connected to a bush or empty cans so that a sentry could use it to alert the main force of intruders.
Kanang, 8 metres from the enemy sentry position, launched an attack to his right flank. It then became apparent that the main force lay to the left. They assaulted the left and routed the enemy taking one casualty and killing five communists. One soldier was seriously wounded and Kanang himself took three rounds but survived and eventually returned to active duty. Kanang anak Langkau was conferred the "Seri Pahlawan Gagah Perkasa" for valour in decimating the enemy on 3 June 1981.


He is the only Malaysian who has received 2 bravery awards – the Seri Pahlawan Gagah Perkasa (SP) and Panglima Gagah Berani (PGB). The SP award itself is the highest award in the national order of awards, surpassing Datuk and Tan Sri titles.
Retired and now 68, Kanang now lives in Sri Aman, Sarawak, once a communist fortress.