Zaid Ibrahim : Are his intentions honorable? Have your say please... 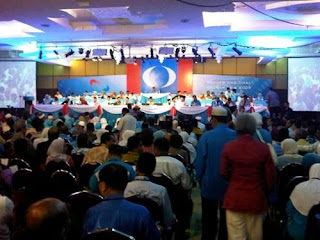 Let get this out of the way first. The Malays learn their politics from UMNO. The good, the bad, the not so good the not so bad – almost everything they know about politics comes from UMNO. There are no generations of Malays who are once or twice removed from UMNO …not yet anyway! Time will make this happen but for now UMNO is the fountain or cesspool of political knowledge –  that gave the Malays their primary, secondary and whatever levels of learning they have arrived at in as far as politics is concern!

Is it not possible then that these graduates from the UMNO pondok of politics are attuned to the ways of UMNO  - the good and the bad – for the foreseeable future? Until at least common sense or an understanding of what the real world expects of them gives them their “EUREKA” moment – and then  - pooof! -  they start to live in the real world? The world that Guan Eng and Nurul Izzah now lives in? The world that so many of us are trying to pull all these politicians in Pakatan Rakyat into! Whether we succeed or not, it will not be for want of trying!

Politics is not a black or white world. Even when it is white it can be beige, cream, eggshell or pearl. When you say black is a colour there will be people who argue that black is not a colour – it is an absence of colour! So let us not go there and just accept that for politicians there is no right or wrong. Only thinking makes it so.

So I am not going in argue with anybody that what Zaid or Azmin is doing within PKR is right or wrong. Anwar was in UMNO now Anwar is not. Mahathir was in UMNO and then he was out, in, out, and in again. For the Malays most roads in politics seem to come from and lead to UMNO. Now here is the no brainer. If we know this, why not take what Azmin and Zaid are now doing, with a pinch of salt? Which means we know they are conditioned to do all this – but we use our common sense to figure out what is right and what is wrong.

For me it is very simple. If you say that you will not contest any post within PKR in the coming PKR election – it means just that! YOU WILL NOT CONTEST! Even if you give me 1001 reasons why you need to contest the election now common sense tells me that your word is not your bond. And for me that is what Zaid did. He said he will not contest –and now he will. He lied!

The biggest consequence to telling a lie is,
it leads you to telling another one.   Gary King.

As for Azmin – who I also do not know – he has never told us that he will not stand for the deputy president post in the upcoming party election. I have received emails this morning telling me he is this and he is that – but no one has emailed me anything that says that Azmin said that he was not going to stand for the post of the deputy president of PKR!
If you have an opinion on this, tell me. All this talking about unprecedented attacks on Zaid after he announced his intention to contest are the cut and thrusts of politics. We all know that the way things are structured in PKR it is the members that will decide – no War Lords in PKR, no money politics in PKR (well I hope not!), nobody offering good money for bloggers to do battle for them (good money meaning six figures lah!)…..so for all those that want to have their say – send me your comments and I will publish them!

Not for the glory of winning or the spoils of victory but always for PKR, for PKR for PKR!
Posted by STEADYAKU47 at Thursday, September 09, 2010