Man inhumanity to others!

Man held for gruesome US kidnap 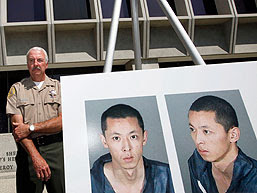 A Chinese national charged with kidnapping a woman for ransom slashed her throat and left her for dead in the Southern California desert before calling her father and demanding $US100,000 ($A106,752) for her safe return, officials said on Friday.
DeQiang Song, 24, who moved to the US from China in 2008 on a student visa, has been charged with kidnapping and attempted murder in the September 8 attack on the 21-year-old woman, also a Chinese immigrant.
The public defender's office did not immediately know if Song had been assigned a lawyer. His arraignment was set for September 29.
Authorities in search of other possible victims released new details of the kidnapping, saying the woman was the target of a brutal attack by someone who choked her with a cord until he thought she was dead.
When he realised she was still breathing, her throat was slashed from ear to ear with a knife, but the deep cut somehow missed major blood vessels.
It was "senseless, brutal, and horrifying," Sheriff Lee Baca said.
Believing the woman was dead, the attacker left her in the desert about 145 kilometres northeast of Los Angeles, drove back to the San Gabriel Valley and called her father to demand the ransom money.
Meanwhile, the woman managed to stumble and crawl through nearly a kilometre of desert scrub until she came to a house where residents called for help. She was flown by air ambulance to a hospital for lifesaving surgery.
Working through the father, investigators persuaded the kidnapper to agree to a smaller ransom of $US10,000 ($A10,675) and designate a drop site for the money.
Song was later arrested at the site in a strip mall parking lot.
Detectives praised the father for calling authorities. Historically, members of the large Chinese community east of Los Angeles have been reluctant to call police, but that pattern is shifting.
Before moving to the Los Angeles area in July, Song lived in Chicago's Chinatown. It was not clear, however, if he ever enrolled at any school.
His only other known arrest was for a white-collar crime shortly after moving to Southern California, but authorities believe the level of planning in the kidnap suggests Song might have been involved in other unspecified offences.
Investigators have been in contact with Chinese authorities and appealed to other agencies in the US to see if Song was wanted for any crimes in their jurisdictions.
Posted by STEADYAKU47 at Saturday, September 18, 2010