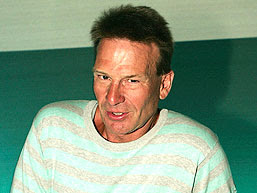 The next time controversial football media personality Sam Newman goes too far it will cost his employer, the Nine Network, $200,000.


The communications watchdog announced on Tuesday that Nine's AFL Footy Show had breached the commercial television code 12 months ago when Newman labelled a Malaysian man a monkey.
Nine has agreed to pay $200,000 to charity if Newman breaches the code again.
Last September, Newman held up a photo of a 107-year-old Malaysian woman on the program and called her new husband a monkey.
Panellist Brendan Fevola said "You can't call him a monkey", before Newman replied, saying the man was "not long out of the forest" and appeared to also compare Serena Williams to the Malaysian man.
The following week ABC Media Watch host Jonathan Holmes called Newman a "drongo", and said that "in a week when another ugly attack on Indian students has again put the international spotlight on racism in Australia, surely we can do without garbage like that".
On Tuesday, the Australian Communications and Media Authority (ACMA) said in a statement that the Malaysian man had been held up to ridicule "on the basis of colour and race".
"Nine's offer of an enforceable undertaking, whereby it would pay $200,000 to an agreed charity for any future breach by Mr Newman of the code provision, confirms both the seriousness of the breach and the seriousness with which Nine is approaching future compliance," said ACMA Chairman, Chris Chapman.
"Ridiculing or racially abusing dark-skinned people by comparing them to monkeys has recently received much media attention in Australia, particularly in and around the sporting arena.
"We believe a sporting commentator such as Mr Newman would have been aware of these incidents and should therefore have been aware that using the word monkey in this manner would be likely to provoke severe ridicule."
Nine had also agreed to other action, he said, including "significant senior management overview of the materials to be used by Mr Newman and a broad-ranging reporting regime and training obligation".
In March, last year, ACMA found Nine had breached the same code provision on the grounds of gender, when he manhandled a lingerie-clad mannequin depicting journalist Caroline Wilson during an on-air segment.
Comment was being sought from the Nine network.