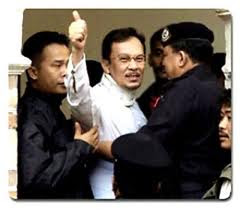 I am not one for carrying Anwar’s balls! Neither am I in the business of saying something is right when it is so obviously not. Let us get things in perspective.

In 1998 when those balaclava masked police unit stormed Anwar’s house in Damansara and took him away  - did you remember if you were brave enough to protect him from the PDRM goons?

When he was brought to court black and blue  - did you stormed Bukit Aman, the courts or Mahathir’s house to show your contempt and disgust at the manner the Mahathir government was treating him?

And when he was sentenced - yes there were demonstrations all over KL - but were you in the demonstrations? What did you do against the goons from PDRM.

This is the problem we have now. When Barisan Nasional is on the run, when Mahathir has been reduced to an old man desperately seeking to be relevant to the changing times by prostituting himself to Perkasa, when UMNO for the first time in its existence has to grapple with the possibility of defeat in the coming general election, and when FOUR states are under Pakatan Rakyat….…when all this has happened we have these rats, worms and parasites coming out of the woodwork making all sorts of grand pronouncements of how things should be – as if they have been beside Anwar all this time from 1988 until today, Friday the 10th September 2010. 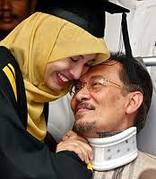 Please do not try to share the spotlight that is now on Anwar and those people who have stood with him through thick and thin. Get out of the way! Anwar and Azizah have been through it all. Nobody and I mean nobody can even start to understand and comprehend what he or she has been through. To think that you do is making you out to be a simpleton…a village idiot!

Do not try to second-guess what Anwar or anyone else within the Pakatan Rakyat leadership is doing! None of us know enough to be able to make an educated guess as to what is happening.

Is there vested interest in the things that they do? Of course there are! They are all fighting for their survival in PKR, in Pakatan Rakyat and within the political arena in Malaysia which is full of devious personalities. They do what they have to do to survive. I have enough confidence and trust in the leaders of Pakatan Rakyat – of which Anwar is just one of – to do the right thing for our country, for our people and for Pakatan Rakyat.

Will they make mistakes tomorrow, next week or in the future? Of course they will! Just understand this – they are doing the best they can. And that is good enough for me!

If you, like me, sit in a comfortable high back executive chair with a cup of coffee by your side and tapping your keyboard to put your thoughts onto your PC, then please do not start to think yourself as GOD and start to tell Anwar or Pakatan Rakyat what they should or should not do.

Struggle as they have struggled. Understand the dread of waiting for that Special Branch knock on your door in the early hours of the mornings! Understand the ache of having those you love beyond your reach! And hope that you will never have the fear of God put into you by the goons of those who are in power. Only when you know all this then you can write what you want 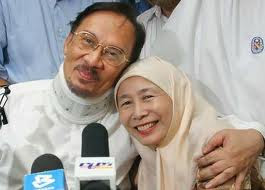 
Is that the best you can hit me with? “backside lover?” Come on lah….call me a coward for not being brave enough to stay in KL and fight UMNO, call me a traitor to the Malays because I am against UMNO and you can even deride me for marrying a foreigner – but a backside lover?

Just look at what the others write on the same subject:

"The man has made immense sacrifices for the sake of the country. He has suffered immensely even physically under TDM's vicious regime in the hands of the Karate Kid. DSAI has persevered and today, he has to be the most admired politician Malaysia has ever produced, like him or loathe him.  None of the present BN goons can face him in any debate. None can match him in focus and directional strategy for Malaysia. Sure, the man is only human but his dream is what Malaysia needs the most today. Then again, there will always be suckers for BN's nightmarish sandiwaras".

Antares said...
Exactly how I feel. I find it easy to admire, respect and love Anwar - and most of the prominent leaders in Pakatan Rakyat. Their fallibility as politicians and their vulnerability as human beings means they are not billboard figures. I focus on seeing a friendly and responsive new management in charge of the massive overhaul this country desperately requires. I long to be able to live in a land where I can admire, respect and love (and if possible befriend) those in power. When they make tiny mistakes, we alert them to the fact and forgive them. If they make big mistakes, we tell them straight up - because we don't fear being detained without trial, tortured by salaried thugs, thrown out of highrise buildings, beaten to death, or shot in the back of the head. Absolutely no way I can feel so warmly predisposed towards any BN politician - especially not those at the very top of the Umno dungheap, whose appalling abuse of power is compounded by arrogance and greed. Hussein Hamid, thank you for your clarity of mind and purity of heart.

So may I suggest that you put some thoughts into what you write and try to put across some rationality and common sense into it. That way more people will read what you write and maybe…just maybe….they might be able to understand your point of view!

But I will allow what you all write to be on my blog because it gives us all great comfort to know the kind of people who are on the side of UMNO!

Stay there. It will do a lot of good for Pakatan Rakyat!