Hijjas Kasturi  is an icon. 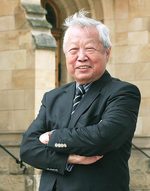 For those of us that calls Bangsar our Kampong, we know where he stays and every time I pass the house I will look up to it and tell myself that for what he has contributed to our nation, he deserves what he has got.


And now somehow, this Najib led BN government has managed to upset this old man!

They are taking his daughter to court for dropping three yellow ballons featuring the words "democracy", "free media" and "justice" at an event attended by Rosmah and Najib - under section 14 of the Minor Offences Act 1955, for behaving in a manner that insults, with the purpose of raising anger that could likely occasion a breach of peace....really?

What is so offensive about "democracy," a "free media" and "justice?".

And now not only has this BN government have to contend with Bilqis...but also that iconic old man, her dad, Hijjas Kasturi and he has come out mad as hell!


What a stupid, stupid thing that this Najib led regime is again doing in their end days in office. The end is near...very very near!

Another deserved nail in BN's and Najib's coffin.