I ACCUSE PM NAJIB AND ROSMAH OF COMPLICITY IN THE ALTANTUYA MURDER - 'MURDERED IN MALAYSIA:THE ALTANTUYA STORY', CHAPTER 1 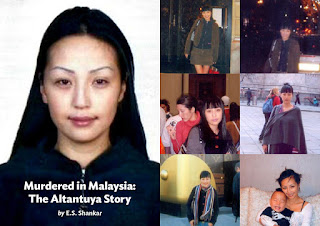 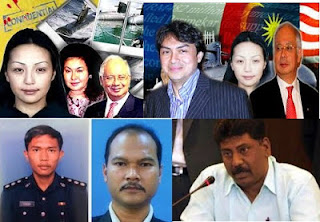 THE COMPLETE A-Z OF THE ALTANTUYA MURDER. TO BUY THE BOOK, CLICK HERE


The golden rays of light first dimmed and then ebbed away forever from the 28-year old body of Altantuya Shaariibuu or Altantuya, a Mongolian national, on an ill-fated night in October 2006. She was brutally and inhumanely slain without the slightest compunction or sliver of remorse on the part of her killers, deep in the jungles of Shah Alam city in the west-coast state of Selangor, geographically situated adjacent to Malaysia’s capital city of Kuala Lumpur. An extrovert and an extremely beautiful young woman, she had a colourful reputation. She had harboured ambitions of becoming a super star when she signed up in 2000 with a modelling school in Paris, France, the haute couture capital of the world. Altantuya was also a young translator whose fatal misfortune it was to have been indirectly entangled in the Malaysian government’s defence procurement programme and its often shady, convoluted and labyrinthine, but always secret and highly classified contract dealings amounting to tens of billions of ringgit. Rumours surfaced she had been recruited by a foreign spy agency for a honeytrap sting operation.

Altantuya’s disappearance may even have been dismissed and forgotten as one among many uninvestigated, or investigated but unresolved missing-persons report or as just another run-of-the-mill death, and possibly covered up, were it not for several extraneous factors.

Altantuya – Murdered and Body Blown To Bits with Explosives

One, Altantuya, whose father was a very prominent Mongolian, was gruesomely blown to bits by explosives planted on her body! Were it not for the hand of fate, as DNA testing had advanced, Altantuya’s murder may well have never been discovered and her body identified with dead certainty. Only her bone fragments and some tissue and hair were retrieved by forensic experts who successfully matched her DNA with blood samples obtained from her parents in Mongolia. Government pathologists certified that the cause of her death as from ‘probable blast related injuries.’

Three, deeply implicated in Altantuya’s murder was a very prominent Porsche 911-driving Malaysian, a so-called defence strategist, Abdul Razak bin Abdullah Malim Baginda, a Malay Muslim who owned and headed the Malaysian Strategic Research Institute (MSRI). Baginda was charged with abetment of murder. Though married, Baginda had, by his own admission committed khalwat, by having an affair lasting eight months with Altantuya. He claimed he was subsequently blackmailed by her. He was one of Najib’s closest friends and policy advisers. Baginda moved freely and in chummy familiarity with the top brass in the corridors of power in government, in particular the Ministry of Defence and the armed forces.
Click here to read more at Donplaypuks
Posted by STEADYAKU47 at Thursday, September 24, 2015