The son of Tun Dr Ismail Abdul Rahman does not disappoint! 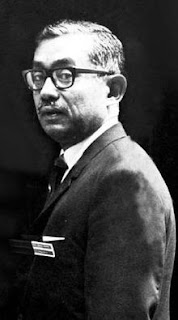 The son of Malaysia’s second deputy prime minister Tun Dr Ismail Abdul Rahman said the G25, however, took a non-partisan position and would not get involved in such a matter.
Tawfik said former deputy prime minister Muhyiddin had summoned G25 for a meeting in September and told them of his unhappiness with Najib’s leadership and how he had come to be in his current position.

“And then he asked us how we could help. We said, well, first of all, we don’t think we are inclined to take sides in politics. We’re non-partisan.

“And we told him we felt that he and Dr Mahathir were not the right people to fight Najib. He was a bit taken aback, asked me to explain.

“So I said, you know, for every dart that you throw at Najib, Najib throws two darts back,” said Tawfik, adding that the constant barbs between both sides would just confuse the public.

He said Muhyiddin was told that the ills should be taken up by the young, who were going to inherit the country, and mentioned as examples Umno Youth chief Khairy Jamaluddin, PKR Youth chief Nik Nazmi Nik Ahmad and DAP leader Liew Chin Tong.

“These are the young up-and-coming leaders who have a bigger stake in what happens in the future than Dr Mahathir, Muhyiddin and Najib,” said Tawfik.

G25 also told Muhyiddin that by taking sides, they would not be able to perform their role of bringing moderation back to Malaysia, as they would be alienating certain segments of society.

“That’s what we told Muhyiddin. We need to have contacts with all our grassroots and we cannot do it if we are partisan.

“It’s best for us to bring the current players back to the centre. Because if you can’t get rid of them, you might as well change them,” Tawfik said of the group’s conversation with Muhyiddin, who was  dropped as deputy prime minister in a cabinet reshuffle in late July, after openly questioning Najib over alleged financial scandals in his brainchild 1Malaysia Development Bhd (1MDB) and the RM2.6 billion deposited into his bank accounts.
The Malaysian Insider interviewed Tawfik in conjunction with the release of Drifting into Politics, a collection of writings by Dr Ismail himself and of which Tawfik is a co-editor with academic Ooi Kee Beng.

It was also the 100th birth anniversary of Dr Ismail on November 4.

The G25 began as a group of 25 retired civil servants who late last year penned an open letter to the government appealing for a return to moderation and for rational dialogue on the position and application of Islam in laws and national policy.

The group has since grown in number and comments on issues involving race and religion while advocating moderation.

Dr Mahathir, during the meeting with the G25 to discuss Islam and the constitution earlier this year, had tried to steer the topic to 1MDB and began attacking the government, said Tawfik.

“So I told him we’re here about Islam, not talk about politics. But he kept on insisting. Then I told him, if you get rid of Najib, who are you going to replace him with? And what makes you think he would be any better?

“He said, ‘well, you know, the person who succeeds him will be guided by a council of elders’,” said Tawfik.

However, Tawfik said he could not accept such an argument, as it would be undemocratic to have an unelected council of elders dictating the prime minister.

He said Dr Mahathir had also criticised Najib over the money that the prime minister allegedly lost.

“So I countered back, from the time you were prime minister to the time you retired, if I took all of your losses and counted it to present day values, I’m sure it will be more than what was lost in 1MDB.

“And then everybody around the table was stunned because they didn’t expect that confrontation,” said Tawfik, adding that the meeting ended with their argument.

The former Umno lawmaker admitted that he did not hold Dr Mahathir in high regard and blamed the former prime minister and his policies for the current state Malaysia was in.
He said Dr Mahathir had undone the work of Dr Ismail and Malaysia’s founding fathers in his desire to cling to power.

Racial issues only started when Dr Mahathir became increasingly concerned about “Malay rights” and began using the other races as a scapegoat to unite the Malays, said Tawfik.
Malaysia's increasing “Islamisation” could also be traced back to Dr Mahathir’s attempts to counter the influence of PAS, he added.

Ultimately, Dr Mahathir’s predecessors were only striking out on the path that he had carved himself, said Tawfik.