Malaysia On Top Of The World Thanks To Umno’s ‘Intelligent Leadership’, Says Hishammuddin

PETALING JAYA— Umno vice-president Datuk Seri Hishammuddin Hussein extolled his own party’s leadership today for succeeding in putting Malaysia on the world stage in a glowing light despite the many trials and tribulations faced within the past one year. Read More...
www.malaysiandigest.com

steadyaku47 comment : The above "intelligent comment" by this "intelligent" cousin of Najib is what you call "Hubris Syndrome"

Najib Razak at risk of isolation amid Malaysian corruption scandal 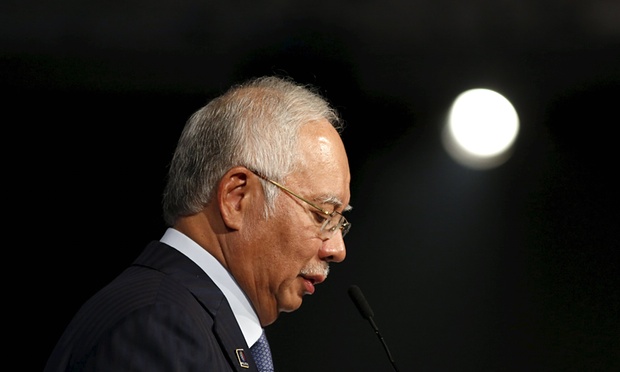 Malaysia is a country in turmoil. The country’s prime minister, Najib Razak, is alleged to have performed daylight robbery with the depositing of $700m (£456m) into his personal bank account.

The FBI and police in Hong Kong have launched investigations as the worst crisis of Najib’s career unfolds. Swiss authorities have frozen millions of dollars in bank accounts linked to 1Malaysia Development Berhad, the state development fund at the centre of the corruption allegations.

And now the nation’s powerful sultans have broken both their silence and their non-political stance to call for a swift investigation into 1MBD.

Najib has denied taking any money and has launched a campaign to disarm his critics. Cabinet ministers who have openly doubted him have been sacked, the media have been suppressed and outspoken politicians have been repeatedly chastised.

In August, when Kuala Lumpur was full of thousands of protesters wearing yellow – the adopted colour of protest against Najib’s rule – Zahid Hamidi, the deputy prime minister, banned the colour. The name of the movement which organised the rally, Bersih, was also banned. Bersih means clean in Malay and the movement was formed in 2007 to champion freer and fairer elections.
Amid this tumult, Najib appeared to be down for the count, but not out, and some now believe his opponents may regret a missed opportunity. His current respite is due to lukewarm opposition within his party, United Malay Nationalists Organisation (UMNO), which leads 12 coalition partners, and a fortuitous breakup of the main opposition group, Pakatan Rakyat.The rest of the country, however, has been consumed by little else. Malaysia is the current chair of the Association of Southeast Asian Nations (Asean), the economic bloc for the region. But it spent most of 2015 defending its administration and the ringgit, Asia’s worst-performing currency.

Najib’s mortal threat definitely lies inside the party, where Muhyiddin Yassin – whom he dismissed as his deputy prime minister – lies in wait. There is also his potential nemesis, ally-turned-foe and former prime minister Mahathir Mohamad, who has led calls for Razak to step aside.

Fearing them, Najib has avoided directed confrontation – he has met Muhyiddin only once, and sent a legal notice to Mahathir’s ally, the former minister Ling Liong Sik, instead of him for casting aspersions on him. Although Muhyiddin continues to express love for the party and the national coalition, opposition parties are looking at him and other naysayers to act as key partners against Najib.
Dangers lurk for the prime minister. But he has a few cards to play. On Tuesday, Malaysia’s courts ruled the government could continue to use a sedition act dating back to the British empire – a law used to charge around 30 anti-Najib politicians and activists.
Such a sledgehammer blow may unbalance Najib’s detractors, but it could backfire if it leads to further instability, possibly resulting in Najib cutting a solitary figure.
Praba Ganesan is chief executive at KUASA, a Malaysian NGO using volunteerism to increase political engagement in the country.
Posted by STEADYAKU47 at Saturday, November 14, 2015