Hubris within DAP and its rapid descent into political lunacy.

The unit, clad in red shirts and caps, will also act as the opposition party’s disaster relief group, the DAP said, citing as examples where the unit could act in future like the previous major flood in Kelantan and the water crisis in several areas in Selangor last year.

“They will be wearing red shirts, since red is the colour of the party. But this red is a good one, not the evil Red Shirts,” DAP secretary-general Lim Guan Eng said while launching the unit during Selangor DAP ordinary convention.

Vulture economics and vulture politics  is a staple for Umno. What need is there for DAP
to descend into political lunacy by the formation of this "Unit Tindak"?

What ever the purpose of this "Unit Tindak", whoever DAP appoints to be in it and to lead it, I know that Umno will not rest until this "Unit Tindak" has been run to the ground, humiliated, rubbish and disbanded and DAP is made to understand what "Ketuanan Melayu" means to Umno!

Who is that idiot in DAP who came up with the idea of  setting up this "Unit Tindak" to provide security at party events against Umno's and BN's "thuggish politics?". If the PDRM cannot or will not stop these thuggish behaviour what makes DAP think that this "Unit Tindak" can?

Are they going to be staffed with DAP members who are experts at self defense techniques? Huh....!

We know already what these thugs do to other Malays from the opposition.Can you imagine what they will do to the "Unit Tindak" members?

Try for PM, DAP urged after gunning for PAS seats

By BY ZURAIRI AR | The Malay Mail Online
PETALING JAYA, Nov 1 — A DAP member called on the party today to take risks and to start trying even for the post of prime minister and mentri besar, citing a large talent pool among its leaders.

Muhammad Shakir Ameer, an executive committee member of DAP Socialist Youth, said the DAP should also contest parliamentary seats currently held by PAS, after the Selangor chapter of the predominantly Chinese party announced it will prepare to contest eight such state seats.

“People say that DAP is power hungry. But we just have crazy ideas. And we know that they are workable,” Shakir said in a debate at the Selangor DAP convention.

For me what DAP has been doing in these last decade or so is the most effective way of winning over the electorates. Field decent candidates that resonates with all Malaysians. Win election and do what you said you will do. We want the best candidates to lead us ...whether at state or federal level....and when you have the support of the electorates those position at state and federal level will be filled by those candidates elected by the people.

Why give Umno any ammunition to use in keeping the rural Malays on side and  getting other Malays to join them? I guess the lessons of May 13 has yet to sink in or have already been forgotten by DAP.

We know already that the DAP today is not the DAP that it was once was. It is changing for the better. It is morphing into a Malaysian entity but it still has a long way to go...and please get Malay like this Muhammad Shakir Ameer to shut up. 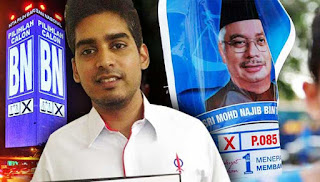 If that guy above is Muhammad Shakir...there are already questions being asked if he is a Malay or a Mamak.....and you know what that can do to DAP's credibility...calling a Mamak a Malay!

Slow and steady...slow and steady will win the race. There is no question that DAP has leapt ahead of PKR and PAS within the opposition conclave and has now left MCA far behind in getting the Chinese on side. DAP must continue to lead responsibly.

You do not lead responsibly by setting up a "Unit Tindak" and start announcing to the world that you want a DAP member as MB or PM.

Because for most Malaysians, especially the Malays, they equate DAP with the Chinese....so when someone from DAP says that they want a DAP member to be MB or PM...most Malaysian hear that as being that DAP wants a Chinese to be MB and PM of this nation....and that, politically and racially, for now, is still a no no!

Though if DAP wants to push the envelope...by all means do so....but be prepared for what is to come when Umno uses that to get the Malays to turn against DAP. I for one think it just does not make good political sense to do so.

Let us have the best Malaysian to be our MB's and our PM and let us leave it at that for now.