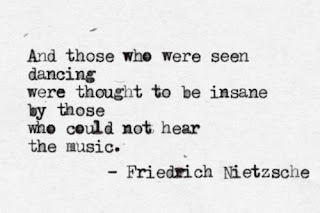 Seven years ago I said my final goodbye to KL. I now call Australia home. Every day in many ways I and my family have been the better for doing so. If I look around me I am comforted by the presence of my wife and son and the life that we now lead. Not a life of great comfort or of plenty, but certainly a good,decent life. Even as old age takes away from me much of what I once took for granted - good health and the ability to take care of myself and those that I love - the future still holds no great uncertainties for me......only the promises of a good life in the twilight of our remaining years. Australia will take care of me as it is taking care of me and my wife now. We have enough to eat, a roof over our head and the means to allows us to enjoy what is left of our life in comfort and with dignity. And in times of needs I have friends to help me through the tiring times.

In my lifetime two people have stood out from among others. Mandela and Aung San Suu Kyi. We were privileged to see Mandela walk out of prison and fulfill his rightful destiny in leading South Africa unencumbered by any negativity of the decades he spent imprisoned on Devils Island...a life lived fully in the service of humanity, his people and his country. 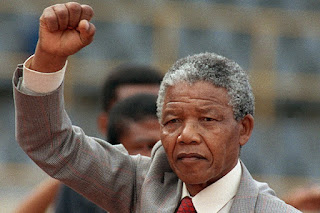 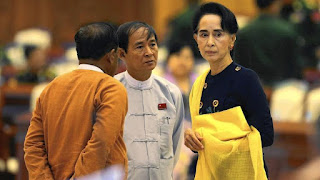 Aung San Suu Kyi too I have followed for years and it is a great joy to see her have the opportunity to also fulfill her destiny to lead Burma. Only time will tell if she can lead her country into the 21st century...not an easy thing to do when her country still languish about a century behind many others!
And then there is Anwar Ibrahim! 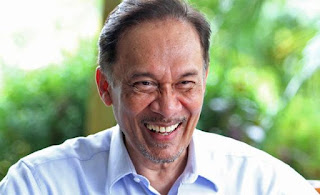 No ....I am not putting Anwar on the same pedestal as these two. Anwar Ibrahim still has much to do, much to endure and much to prove in the days, weeks, months and years to come....but he is just a step away from greatness.

His trials and tribulations have become ours. When Mahathir and Najib prosecute and persecute Anwar Ibrahim, they are also prosecuting and persecuting us. When our judiciary are compromised by the demands of their political masters to incarcerate Anwar, a part of us goes to prison with Anwar and it is our judiciary that has been compromised! And today when the opposition is denied the leadership of Anwar Ibrahim, we are also denied the leadership we need to to bring our people together and move ourselves towards changing our country's political malaise.

Like Mahathir he choose to fight his political battle with Anwar as cowards do...with the assist of a PDRM that fawningly second guesses the needs of it's political masters with a regularity that deserves only contempt from us and a complicit judiciary that shames itself by pandering to the wishes of this Umno led BN government for their own immediate personal and financial gain!

Mandela served 17 years in prison. Aung Sung Suu Kyi served 15 years. For Mandela to be free South Africa had first to have a decent leader who too wanted South Africa to be free from its bigoted racially driven Government. For Aung Sung Suu Kyi it also took a leader from within the Army who too wanted to see the people and Burma be given an opportunity to choose its own leader and its own destiny. Unfortunately for Anwar Ibrahim Umno is still a formidable opponent and Najib is still prime minister and their political survival will depends on keeping Anwar Ibrahim in prison....so there he will stay for the foreseeable future.

Time changes everything...but can we and our country wait? Can Anwar, at 68 too wait?

For every day that Anwar Ibrahim remains behind bars my disgust at Najib and this Umno led BN government increases. I am ashamed that the electorate majority of Malaysians that took away the popular mandate for BN to govern cannot impose their collective will upon the same government to free Anwar Ibrahim. I feel helpless that a decent human being languishes behind bars and a wife is without her husband and a family without it's head. The opposition is deprived of its rightful leader and our country loses much of its credibility in the eyes of the world for putting behind bars the leader of the opposition simply because the government cannot defend itself against the opposition onslaught if Anwar leads them.

Najib and his cohorts in government should think of what would be their lot if they are banish to the opposition bench at the next general election and the government of the day then decides to pursue them as they have pursued and persecuted Anwar Ibrahim for the best part of the last two decades.

It would do them much good if Najib and his cohorts stops to consider that most apt of rejoinder "Do unto others as you would have them do unto you" one that I sure even Anwar Ibrahim would not hesitate to throw Najib's way.....but power corrupt and absolute power corrupts absolutely....and Najib, Umno and their BN partners in crime, have been corrupted for much too long to be able to see beyond the tip of their crooked nose. I hope their money will help them when Karma strike...for God will surely not!

As for Anwar Ibrahim he will be back among us in the fullness of time. Stronger for having gone through another period of trials and tribulations. I hope in the conduct of his personal affairs he will be much wiser than he has been in the past and in the management of all things politics, I hope he will, like Mandela and Aung Sung Suu Kyi, understand his responsibility to our people, our nation and to our future transcends his personal self. And may God give him the strength to do that!