My List : If there are many many Malays who have the same list as mine - then this becomes a Malay list but in truth I would prefer this to be a Chinese, Indian,Dayak, Kadazan and other minorities list...a Malaysian list. 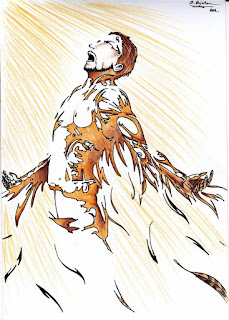 All the Umno prime ministers (have there been any others?????) after Hussein Onn have had the belief, some more so than others, that they have a mandate to do government as they please without regard for the druthers of the electorate.

When the electorate were given the opportunity to speak, their fall from grace because of this hubris was spectacular. Selangor, Penang, Kedah and Perak had, in the recent past, fallen to the opposition. Ministers too have lost their seats at general elections.

Like Icarus who flew too close to the sun on wings of feathers and wax, Mahathir, Pak Lah and Najib have witnessed Umno's descent into the hell of terminal electoral rejection because of complacency and hubris.

For Umno there are lessons to be learned from history, however recent. For Umno the inconvenient truth is simply this : Hubris, complacency, their odious sense of entitlement, arrogance, injustice perpetrated upon others who they consider a threat to their political survival, personal greed and self interest has all become endemic and embedded into the very depth of Umno's Psyche. If there is no change in leadership then there will certainly be a change in government.

There is a widening gap between what the electorates want for themselves and their country and what Umno wants. This situation is untenable because this government's legitimacy comes from the electorates. We elected this government into office and they are our representative. They do not tell us what to do, we tell them what to do.

We all have our lists of things we feel are wrong with our country. There is no right or wrong list. No good or bad list. No list that is more deserving than another one. There is no list more important than the other but If my lists mirrors yours then were are together in thought and spirit.

If there are many many Malays who have the same list as mine - then this becomes a Malay list but in truth I would prefer this to be a Chinese, Indian,Dayak, Kadazan and other minorities list...a Malaysian list.

If enough Malaysian has the same list then the government we elected into power should also make it their list of things to do and when that happens than we can say that our government in our Putrajaya is governing our country our way.

This is not a comprehensive list of what I would like to see done in Malaysia but it will be a start towards the direction we want our country to go.