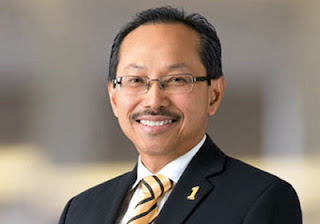 steadyaku47 comment : It looks like with Senator Wahid Omar I have been put in my place by Saudara Abd. Razak Omar for calling the good Senator a "rat". Saudara Razak's note to me follows and I unhesitatingly take back what I have said about Senator Wahid Omar being a "rat"....let it not be said that steadyaku47 will not undur when that is the right thing to do!

Wa'alaikumussalaam Saudara Hussein. No saudara, I am not going to use the likes of 'I can only change UMNO from inside'. I have on & off met Senator Wahid on many occassions, bumped into him, sat with him, sometimes alone, sometimes with his family, sometimes with his very very old parents, at the airport, at some hotels, at small restaurants, at weddings, at his office, at car-parks, at mosques & suraus, at shopping complexes, during Raya, had brief exchanges of pleasantries & sometimes had very long general conversations. Well saudara Hussein, I am very much his senior in age & used to work with & coach him figures when he was young. Like you, I followed his career trajectory too. A man of integrity who serves his God, parents, family, relatives, neighbours, nation, employers & stakeholders well. Weeks before joining PM's cabinet, while having some short conversations with him, he had already indicated that it shall be only for one senatorship term. Demi negara. That came from the horse's mouth. Although very pleasant, approachable & friendly, you won't get to hear more than what you are supposed to know from him. I would describe him as a very responsible, no-nonsense, intelligent & trustworthy person with a clear mind. I would read his staying in the cabinet long after the premature departure of (the sadly quite meek, sorry) YB MP Muhyiddin @ Mahiaddin as: "I'd rather be counted than in the oblivion". His 3-year stint ends just before Ramadan. Let him be at peace as he is a good man, a good servant of God, a good husband, a good father, a filial son & not least a good servant of the nation. By the way, from what I know, not only is Senator Wahid not in politics, never had he any ambition to become one. He doesn't even have a setiausaha politik. So please saudara Hussein, do not liken him as rats. Jauh panggang dari api. Keep up your good work, but do be careful of libellous depiction of unrelated others. Salam.﻿
Posted by STEADYAKU47 at Saturday, May 28, 2016

Email ThisBlogThis!Share to TwitterShare to FacebookShare to Pinterest
Labels: Wahid Omar. An apology.