Cowards die a thousand deaths! Najib and Rosmah....Welcome to Hell! 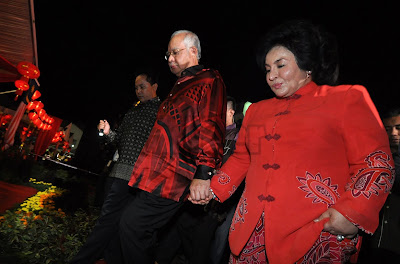 I do not envy Najib or Rosmah these days. Rest or sleep will not come easy given the conundrum surrounding their sordid life of greed, avarice and unbridle arrogance! All the Kings horses and all the Kings men have never give them the peace and tranquility that they thought would be their domain once Seri Perdana became their residence. Nor has all the money that Najib seems not to know is in his Bank given them any respite from the greed of wanting more. The knowledge that they are so far victorious over Mahathir has not enabled either of them to rest easy....for what Mahathir does is still a work in much progress!

And now as they gallop into that final furlong towards political death, Najib, Rosmah and the criminal elites (all beholden to that "Cash is King" mantra) will all surely know that the end is nigh. The goings on within BSI is amazingly, breathtakingly painful to consider and in the depths of all this financial abuse is 1MDB.

“To die, to sleep -
To sleep, perchance to dream - ay, there's the rub,
For in this sleep of death what dreams may come...”

Alas Najib, if only it was that easy......you will not have the courage seek death to run from what is to come....cowards die a thousand deaths! Welcome to Hell!

25 May 2016, PM 12:49
Updated 25 May 2016, PM 12:52
Swiss Financial Market Supervisory Authority (Finma) said the 1MDB investigation showed funds were transferred within a client group that controlled over 100 accounts at BSI Bank.
Finma revealed this in detailing the "serious breaches of money laundering regulations" by BSI Bank.

"In the context of the 1MDB case, the bank failed to adequately monitor relationships with a client group with around 100 accounts at the bank.

"Transactions were executed within the client group and with third parties without the bank adequately clarifying their commercial justification," it said in a statement.

An example, it said, was BSI Bank being contented with the explanation that a deposit of US$20 million was a "gift".

"In another case, an account was credited with more than US$98 million without any effort to clarify its commercial background.

"The bank executed transactions involving similar amounts even though in some cases the explanations and contractual documents obtained contradicted the purpose of the account as stated when it was opened," it said.

"The bank failed to properly document or carry out plausibility checks on these transactions or was happy to accept the explanation that the beneficial owner of all the accounts was the same person or that the transactions were being executed for 'accounting purposes'," it said.

Finma's announcement coincided with the Switzerland's Office of the Attorney-General (OAG) launching criminal proceedings against BSI Bank in Switzerland and Singapore authorities ordering the closure of BSI Bank in Singapore.

Finma said the transactions spanned across several continents and financial centres, prompting it to work with several foreign regulatory authorities.

"It carried out on-site investigations at the BSI subsidiary in Singapore in parallel to Finma's proceedings and identified comparable control failures there.

"The Monetary Authority of Singapore has also informed about its intention to withdraw the BSI's local licence and impose a fine of approximately S$13 million," it said.