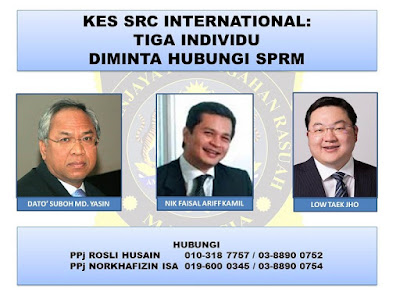 SRC International, once a subsidiary of 1MDB , is now under the direct ownership of the Finance Minister as of February 2012.

"The company obtained an Islamic Term Financing from Kumpulan Wang Persaraan (Diperbadankan) (a public pension fund known as KWAP) amounting to RM4 billion which is guaranteed by the Government of Malaysia and bear profit rate of 4.65% per annum for the first 3 years and profit rate equivalent to 10 times Malaysian Government Securities (MGS) profit rate plus 70 basis points for the remaining tenure of the financing which currently at 4.3%"

"The facility has been draw down in August 2011 and March 2012 at RM2 billion respectively whereby the first profit payment shall be on the 30th month out of 120 months and principal payments shall take effect on the 72th month onwards".

We are informed by the Prime Minister/Finance Minister that SRC International have invested “in “Gobi Coal & Energy Ltd, an energy company based in Mongolia. The investment was made jointly with international investors, with each owning 50%” 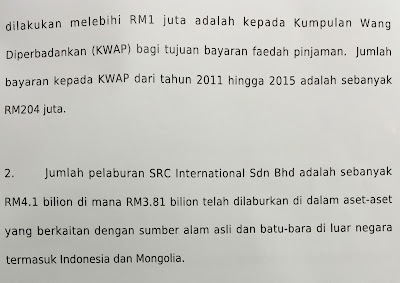 The International Investors referred to by Najib Razak is Origo Partners PLC. The truth of the matter is simply this : SRC International holding in this company is valued at a few million dollars, at best, under 5% of the RM4 billion borrowed by SRC International from KWAP and guaranteed by the Government of Malaysia!
click here for more.

What happened to the rest of the money?

In November 2011 SRC International paid US$170 million into an overseas account at the Swiss private bank Julius Baer.

Malaysian Anti-Corruption Commission (MACC) have identified two sets of of payments totalling RM42 million and RM27 million, transferred within Malaysia from SRC to the Prime Minister’s AmBank accounts. These payments were facilitated by Nik Faisal Arif Kamil, according to the evidence, and Sarawak Report has already provided documents to show that the Prime Minister had granted Kamil authorisation to manage these private AmBank accounts on his behalf.

This domestic investigation was sensationally closed last month, through a single-handed intervention by the new Attorney General, whom Najib had installed after unconstitutionally sacking his predecessor for drawing up charges against him relating to these transfers.
The hand-picked Attorney General has now been challenged on the matter by several legal figures and a growing number of police reports and law suits have been initiated against him for exceeding his authority in over-ruling the recommendation of the MACC that charges be brought. Sarawak Report. Click here for more :

To add insult to injury Nik Faisal Arif Kamil, CEO of SRC, has fled to Indonesia. He is well protected by Malaysian authorities. He can leave and return to Malaysia whenever he wants. The authorities close one eye and shut the other despite Nik Faisal being a "person of interest" to Malaysian Anti-Corruption Commission/SPRM and no one will notice unless someone recognize him. He is still CEO of SRC International  and is free to manage SRC.

With the Power of Attorney he holds over a number of Najib Razak's private bank accounts,  he is also free to manage Najib's bank account to ensure that this "Cash is King" prime minister is suitably financially lubricated by the billions still in SRC International coffers courtesy of the RM4 billion it borrowed from KWAP (the rakyat pension fund) and guaranteed by the government of Malaysia! 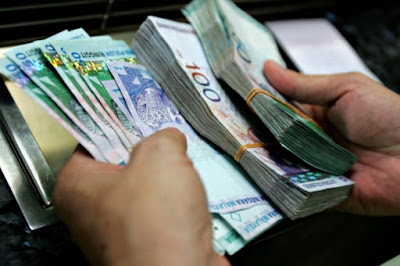