Sultan Ahmad Shah : "O, what a tangled web we weave when first we practise to deceive!"

Amongst the decadent pursuits of Royalties in Malaysia, the sexual exploits of Sultan Ahmad Shah of Pahang, to the uninitiated, is so legendary as to be beyond belief. What has previously been talked about in whispers and hushed tones amongst many Malaysians is common knowledge to those who are familiar with a Sultan whose raging hormones seems to make him to be permanently on heat. An industry has sprung up around him of those who actively seek to feed the Sultan raging libido by seeking local and foreign sex partners who are willing, unwilling or if necessary, paid, to service the sexual needs of this Sultan in return for whatever favors the Sultan can bestow upon them. The religious authority be dammed! The Sultan shall have his libido satisfied without any regard to his position as the head of Islam in his State.

For his subjects in Pahang the reality of a Sultan sowing his wild oats all over the state, the nation and more often than not, overseas, is a blight upon their state - one they accept with quiet shame. What else can they do?

At his age this Sultan deserves to have some peace of mind to contemplate his exploits in his younger and not so younger days and what is to come when he meets his maker.  But how will there be peace for this Sultan if what he did in the past catches up with him in the twilight of his years?

But I am getting ahead of myself here....let us go back to the time when Sultan Ahmad Shah was the Yang di Pertuan Agong in the early 1980's. To the time when the "activities" at the  Istana Hinggap Pahang at Bukit Kewangan near Jalan Raja Chulan was talked about amongst many of us who had some inklings of the goings on there with wry amusement and a certain amazement that being the Agong had not cramped Sultan Ahmad Shah's style in any way.

If anything, Sultan Ahmad Shah appointment as the Yang di Pertuan Agong acted as an aphrodisiac to this Sultan who took the appointment as license to look further a field in his search to satisfy his craving for sex.

Dina Briezela Cooper was then a 27 year old Filipino Nurse working in KL under a program sponsored by the United Nations and Sultan Ahmad Shah was 50 and King.

"I was amazed to be introduced to the King of Malaysia at one such gathering very early in my stay in Malaysia. Almost immediately the Agong showed great personal interest in my situation and propositioned me during the first meeting". Dina Brizuela comment on the first time she was introduced to the Sultan

Extract from next posting : 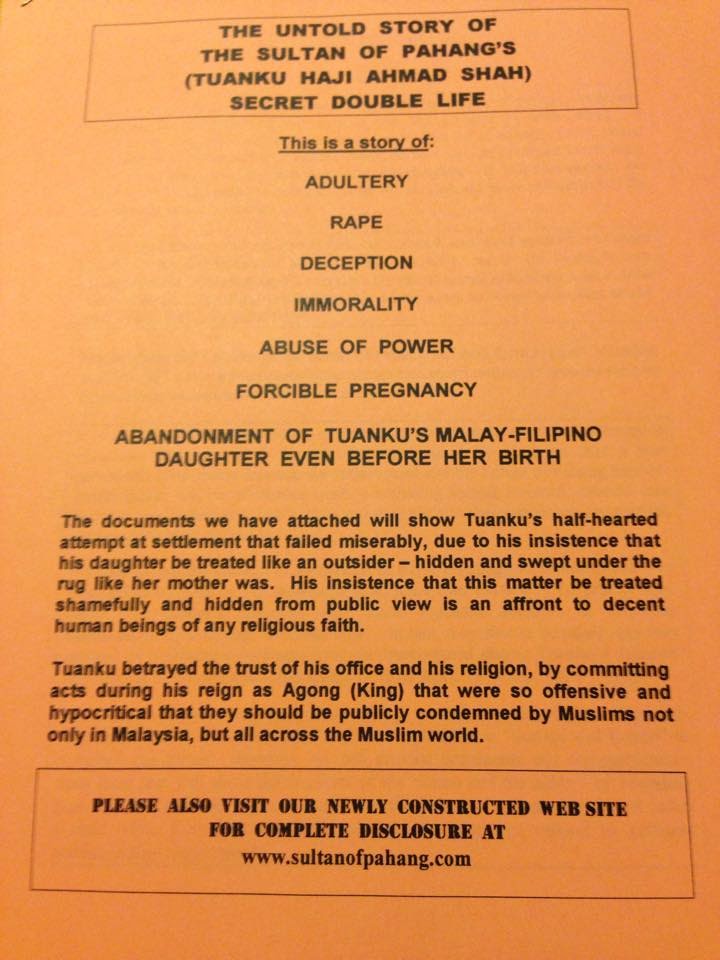