Against all odds Dina has been able to make a life of her own and now only wants what is Carla's right - a father, and if her father is Sultan Ahmad Shah of Pahang, who can deny her that right?

Many of us continue to delude ourselves that in life we are all equal. That we were all born equal is a fallacy that is inherently flawed from the very beginning. I was born in Segambut and my daughter in Assunta. My wife was born in Aradhippou in Greece and my son in Adelaide. From the time we were born our fate for the future were irreversibly sealed by the events that preceded our birth and what comes after it. You cannot tell me that a baby born in the slums of Calcutta has as good a chance of making it in life as a baby born at the Royal London Hospital in Whitechapel. What determines our fate, our future and our station in life are largely the circumstances of our birth and what comes after that.

My first inkling of "being different" from others of my age was when I went to MCKK to study. I remembered that many relatives came over to our house to bid me farewell in the days preceding my departure for Kuala Kangsar. Thereafter, for the first few years at least, going back to KK after our holidays meant a gathering of relatives at the KL railway station to send me off back to Kolet. You do not get that sort of treatment when you are attending the local primary school!

I have been fortunate enough to have had a privilege childhood. On my Father's side my grandfather, Latiff, was a Doctor and his sons - Karim, Ismail, Jamal, Yaacob, Hamid, Manap, and daughters Yone, Maimunah and Echone - my father, my uncles and aunties - married into money, privilege and all that was good in life and it was in this circle that I grew up. I had uncles who were ambassadors, senior government servants, a Mayor even and my father himself was Director of CID under Tun Haniff. All that was good in life I had and more.

What made me an ordinary human being was the manner in which my parents taught me to live life. When my father was CPO (Chief Police Officer) of Pahang in the early 1960's I remember a time when we were on a visit to KL and was stopped by a  policemen for a traffic infringement. My father was asked for identification and he handed over his Identity card that identified him as a police officer - no dramas from my father - only an acknowledgement that he did make a mistake. The policeman came to attention and saluted and apologised profusely. My father said that there was no need to apologize as he was only doing his job and we were on our way. There were times when we got to ride in my Father's official Holden car with the driver. Pa Chik Ghani, in full uniform but only when my father was in the car with us. None of us, my mother included, were allowed to use the car without the expressed permission of my father. From him and my mother I was taught  how to behave in life.

But that is me.

I fully accept that people are different because they have gone through life in a different manner and their values and beliefs are different from mine.....what levels us all, we hope, are the laws and legalities that governs our life.

This is not possible in Malaysia today because the application of the laws of the land depends on who you are.This has become something that those in position of power are claiming to be yet another of their entitlements in their already privileged life! When the rich, the privileged and those in government and high public office are one in their beliefs that they are entitled to be above the laws that ordinary Malaysian are subjected to - then the the breakdown of the fabric of our society is inevitable.

This is what is now happening in Malaysia.

The Sultan can only be prosecuted in a Special Court. The Prime Minister and his wife need not answer for the abuse of government privileges accorded to them in their private travels overseas. Ministers are not punished for their raba raba misdeeds but are instead appointed to be our envoy in Washington. The IGP feels himself entitled to bash the former DPM senseless...do you wonder why police constable feel it to be their right to murder suspects in their custody?

And so the breakdown of our society and the erosion of values we hold dear begins and every Malaysians seeks to take what advantage they can out of life rather than choose to be his brother's keeper.

What Sultan Ahmad Shah did when he was the Yang di Pertuan Agong to Dina over thirty years ago is a manifestation of what our society was then heading towards. Today the dye is cast. We see these abuses every day in every way.

We need to stop this abuses and misplaced sense of entitlement. That is why it is important for us to l know what OUR King did in the 1980's and what was the outcome of that abuse - in Sultan Ahmad Shah case - a child, Carla, born out of wedlock.


Carla who will be 34 this August married early early this year. Against all odds her mother, Dina has been able to make a life of her own and now only wants what is Carla's right - a father....and if her Father is a Sultan, who is to deny her that right? 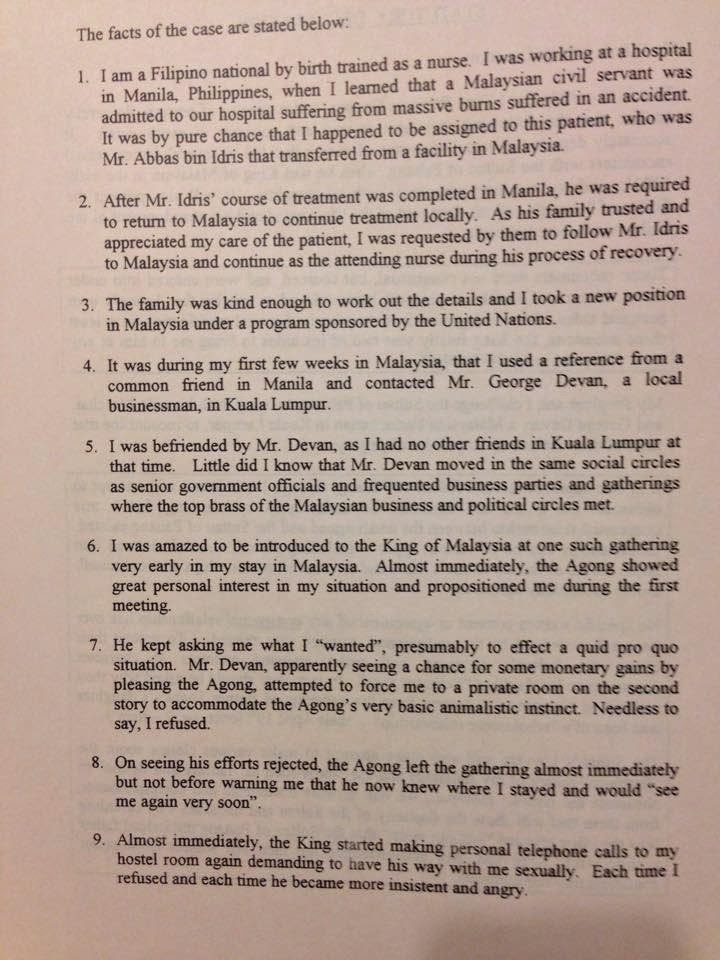