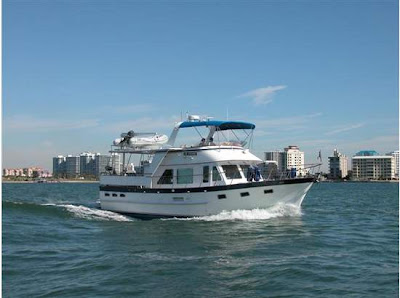 
This is similar to the De Fever that my father had - berthed for most of the time at The Selangor Yacht Club in Port Klang. He had it named WIDURI. When we could my family would spend all our weekend – from Friday evening right up to as late on Sunday evening as we can – just my wife, our two kids - Terrina and Zack and me on board the boat. We did not go anywhere – just being on board it was happiness in itself. It was heaven. And almost every week that we were there we would invariable see my Prefect at MCKK, Aziz Ketot, sailing to his hearts content in his sailing boat by himself –what wonderful memories.

The boat was my Father’s joy. I remember one trip we did to Lumut. We had arrived late and decided to anchor off one of the islands that would shelter us from any strong winds that night. It was past midnight and we settled down to fish while those who were tired slept. The memory of being on the boat, out at sea and lazily fishing still lingers with me till today. The boat generator was on because my father likes to sleep with the air condition on in his room. I was at the stern – or the back of the boat when suddenly a huge searchlight came on and a Police PX patrol boat came out of the night with its crew on deck holding guns aimed at us – they thought we were pirates of some sort. As they came towards us they shouted at us to identify ourselves. In all this commotion my father was awaken and he came on deck. The Officer on the PX recognized him and he did not forget his training. With a loud ‘TUAN” he jumped to attention and gave my father a salute - my Father was Director CID before he retired – and a good laugh was had by all that night before things settled down again.

I love the sea and the boat but I preferred to be within sight of land when on the boat. Not my father. He cruised to the East Coast, to Penang, and to Singapore. This was the second De Fever that he had. The first one sank on the day he brought it back from Singapore. He managed to beach the boat somewhere off the Army camp in Port Dickson. A few days later he was off to Singapore again to buy Widuri. That was when I realized that he did have money!