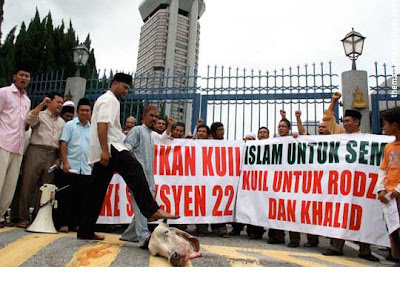 This morning I saw not only those headlines but a very disturbing image of some Malays with Songkok on and dressed for prayers – in fact they have just finished Friday Prayers according to the report in Malaysian Insider – showing much disrespect for the Hindu’s by kicking a dead cow’s head. My first emotion was anger – anger that a Malay, a Muslim just after saying his prayers at the Mosque, would see it fit to do that. Even if he does not understand the horrific significance of what he did to the Hindus he should not show disrespect to a dead animal by kicking his head – right after prayers too. The second emotion was shame – I am ashamed that a Muslim would show disrespect to the Hindus by his action.

For myself, from the depth of my heart – I tell the Hindus – do not let the actions of those Malays and Muslims cause you to lose control over your emotions and seek out other Malays and Muslims to show your displeasure in any way. Those bastards are not worth you spending time on them in any way. Just pity them for their ignorance – and if Najib has any backbone he would go after them as he said he would and use the ISA for what they are really for – to stop idiots like them from causing trouble in our country. Lock the door and throw the key away.

It is easy for the Hindus to vent their anger on other Malays and Muslims because of the actions of these idiots – harder still for them to have cool heads and show us all that the actions of a few will never cause trouble for the many who are innocent. Of course the current situation in our country is tense and turmoil seems just a breath away. Do you not think sometimes that these people might have been goaded…nay even paid…to do such deeds just so our country will be plunged into riots and mayhem? Let cool heads prevail and we hope that our Hindu brothers will show maturity and patience in these trouble times.

For now only the immediate apprehension and punishment of those involve by the authorities would be the given requirement if the Hindus are to hold their peace. Anything short of this action will surely bring upon us much trouble.
Posted by STEADYAKU47 at Saturday, August 29, 2009