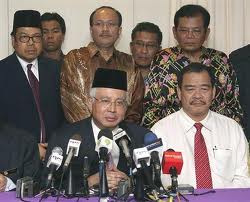 There is much talk these days by our Prime Minister of his Economic Transformation Plan that will transform Malaysia into a high-income and developed nation by 2020….and I really like this part of the plan that says that the ETP will:

“mapped out concrete strategies, plans and initiatives to transform the nation into a high-income economy that is sustainable and inclusive”.

·      No successful implementation means our service sector WILL NOT grow from 59% to 65%.

·      No successful implementation means that Greater Kuala Lumpur WILL NOT be transformed into a world-class city and we will be out of RM1.3 trillion!

But the money to implement these objectives has already been spent – for whose gains? Not the Rakyat obviously! Like PKFZ, like Putrajaya, like Bakun – money spent projects not completed! Siapa untung? UMNO and Barisan Nasional cronies’ lah!

So how can you make don’t know and still say that “growth will be achieved in a sustainable manner, without cost to future generations, through initiatives such as building alternative energy generation capacity and conserving our environment to promote eco-tourism”?....when you know as well as we do that your Barisan Nasional record for achieving growth in any area is at best questionable and at worst zilch? Zero! Negative!
Yes you were right when you said a “bold approach” has been made to develop the ETP. You and your Barisan Nasional cronies have really been “bold” and got a lot of nerve to talk about spending RM1.3 trillion  - and of this 92% will come from the public sector? Huh! You think you can get the private sector to invest in Malaysia when Foreign Direct Investments (FDI) in Malaysia in 2009 have continued its downward trend
“According to the World Investment Report 2010, FDI plunged 81 percent from US$7.32 billion (RM23.47 billion) in 2008 to just US$1.38 billion (RM4.43 billion) last year. 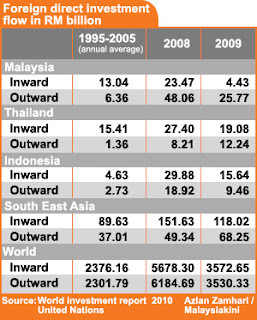 And you emphasize “The ETP presents a departure from norms because it is focused on actions—not on theoretical principles and ideas”. Dream on Najib…dream on…..this Najib always has the knack of saying the right things but cakap bukan serupa bikin lah!
We did not believe you when you said you had nothing to do with the murder of  Altantuya.
And we still did not believe you when you took an oath in the Mosque on the same issue!
So if we do not believe you when you swear before ALLAH why do you think we would believe you when you say all these things about what you will do with the ETP for our country? Desperate people do desperate things to survive....we are going to give enough rope to these Barisan Nasional Politicians so that hopefully they will hang themselves! But I think the "FEAR" of defeat in the 13th General Election that is now going around and around in his head head will be enough to drive him up the wall.....