The Six Blind Man of Hindustan and Malaysian Politicians

It was six men of Hindustan


To learning much inclined,
Who went to see the Elephant
(Though all of them were blind),
That each by observation
Might satisfy his mind.
And so these men of Hindustan
Disputed loud and long,
Each in his own opinion
Exceeding stiff and strong,
Though each was partly in the right
And all were in the wrong.

They conclude that the elephant is like a wall, snake, spear, tree, fan or rope, depending upon where they touch.

We all know about the six blind men of Hindustan who touch an elephant to learn what the elephant was like. Each one feels a different part and they then compare notes to learn that they are all in complete disagreement.
You know friends every time I listen to all those tales about our politicians from bolehland I remember the Six Blind Men of Hindustan and their elephant. I know what an elephant looks like but those blind men can only feel and make a guess….hence the reason why each think that the elephant is a wall, another a snake, and yet another a spear, a fan or even a rope depending on where they touch.

The same goes to for these politicians. Every time there is a problem within our country or within their party – or if they have to explain anything to us – they all have their own way of looking at things and never ever consider that we can tell the difference between a durian from a rambutan? That we know what Perkasa

Some explain what they do by citing “National Interest". Najib was talking about Team Malaysia F1 project as being in the “national interest” – and of course having a Batik Fashion show in Monaco is the numero uno of these “national interest!”

What about the politician who is “exercising my right as a party member” when he decides to do something and then turns around to say “it is in the party interest” for him NOT to do the same thing? And of course he has just the excuse to explain whatever it is he wants to do! He really covers himself at both ends! My question to them is WHO decides it is or it is not in the party interests? It would seem to me that they are judge and jury in these matters of "party and national" interest.

The number of times when a politicians claims that the members wants him to stand for a post in the party and yet when he loses he will be the first one to turn on the very same party members and accuse them of being “bought” over by the other faction!

We know that number of times when a politician will find some one….any one to tell the media or make a statutory declaration detailing all they know about his opponent being a liar, a cheat, womaniser and a bankrupt! But when a ‘surat terbang’ mysteriously emerges detailing the same about him…he will shout, yell and swear that every one is out to defame him and all the 'facts' in the surat terbang are lies lies and more lies!

I think my friends you know what direction I am heading. What is happening in PKR, for lack of a better word, is a Hindustani Elephant size cock up. We, who can see what is happening, knows that despite the one member one vote being crowed about by PKR – the manner in which their first tier political leaders are conducting themselves during this party election leaves much to be desired.

That you must respect those who have been in the party longer.That if Nurul wants to contest for the number two post I will make way for her “provided if what I do is in her interest”.That this is the team that Anwar wants. That Azizah does not want so and so to be her number two….and the list goes on and on….but here is the truth PKR.

Whatever you want to call it, like the six blind man of Hindustan and their elephant the truth eludes you all. In the end it is a sad reflection of your leaders inability to instil discipline and make your members understand that the interest of PKR is served only when PKR’s political elite (if they can be called that!) understand that the interest of the party comes BEFORE their own. Until that becomes a reality what is now happening in PKR is a sad reflection of your leaders immaturity and inability to do what is best for the party and our country.

Their inability to do what is best for their party sadly means that our country has still got a long way to go before we have leaders that we can look up to. And you know what? Wait for the 13th General Election and you will reap what you now sow. 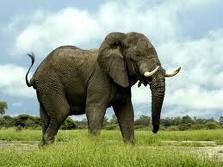 P.S. Please do not ask me which part of the elephant that Din guy from the Home Ministry was feeling(he insisted on wearing a blindfold and joining the Blind Hindustan Guys in feeling the elephant!) Suffice to say that he now has a healthy respects for elephants in heat!

Email ThisBlogThis!Share to TwitterShare to FacebookShare to Pinterest
Labels: Blind Man of Hindustan