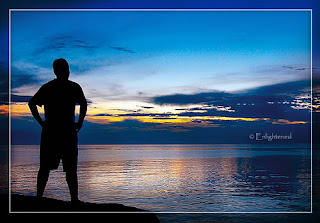 I have been called a lot of names  since I started steadyaku47 – and most of it deserved! Idiot, crook, snake…opps I forgot to include the verb ‘stupid’ before the word idiot…..but you get the drift of what I am saying. Melayu tak sedar diri…self-centered bloody racist…bayak lagi lah! Initially I did the noble thing and allowed publication of all comment without me moderating them…but not anymore. Now I decide what I want to allow onto this blog and it felt good deleting them at source. After all this is my space!

For me the past is past. Do I have regrets for the things I have done? Plenty! Corruption? It takes a thief to catch a thief – and for me I can write about corruption with conviction and understanding from both sides of the divide. No excuses no regrets. At that point of time it was a way of life when you want to do business with the government....and still is!

Anwar was in prison, Lim Kit Siang was someone with a Rocket for his party symbol, Karpal was a good lawyer that could work wonders in courts – especially for criminals. Pas was better kept at arms length and Kelantan was visited with much trepidation. Pakatan Rakyat? Never heard of it! Ibrahim Ali was someone working under Pak Lah and still obnoxious even then! MCA and MIC were the running dogs of UMNO…and they still are!

Today at 63 I am who I am. Comfortable in my own skin. Estranged from my brothers and living a good and happy life here down under with the kangaroos and the aborigines. The whites are also around and should our path cross there is no need to fear each other. We are equals. The law says so and the law makes it so! The Chinese are everywhere. In the Central Markets selling vegies, with restaurants all over this city, driving the good cars in town, on the buses, on the trams…the only problem I have with them is trying to make out if they are from China (very loud), Malaysia (their lingo is unmistakeable) or elsewhere. Go to their food court in the Central Market and you are back home again until you see the cost of a Kueh Teow  - around RM$24 –thank GOD I am rich enough to be able o afford them if I want to…but so can anybody else.

Once in a while I see a Proton or a Satria..but only once in a while. Once I came across a Malay couple with their daughter on the bus. They were sending her to study here – first trip to Adelaide for all of them. The father was a senior civil servant and he looked self-conscious being on the bus. But that is Adelaide – you meet the nicest people on the buses – including me.

I am very reflective these days. Wondering about the rights and wrongs of what I did in business....and remembering that I sometimes did make a stand on issues I believed in only to be swept aside by others whose primary concern was the mighty ringgit.

I remember a particular incident. I was the Manager for Persatuan Bekas Perajurit Wilayah Persekutuan. Our office was beside the green Perkim Building near the MIC head office. Pak Lah was then DPM and their Patron. They wanted to hold a fund raising dinner and asked me to invite Pak Lah to be our guest of honor – I said I would do so if I were allowed to manage the fund raising event. Because the year before Ku Yah was doing it and much money went missing and into her pockets – much more then into the coffers of the Bekas Perajurit Association with the Board of Directors getting their share. They agreed. Kak Endon helped and Pak Lah agreed. Once the date was agreed upon – the Board of Directors told me that THEY not me would do the ‘managing’ of the fundraiser. I disagreed and I got kicked out. Then they went straight to Endon and told her that I had taken money from the Association…this when I had been working gratis because I thought I could make a difference to the way things were being done – and then I would ask for a wage. But no regrets – I got wiser from then on.

And then there was another Malay company – WAJA construction in Taman Melawati. Class A. Two young goons running it...I cannot remember their names now - but one was the son of Mazlan the ex- Datuk Bandar Kuala Lumpur. Many projects but millions in debt. Gangsters barging into the office at all time of the day demanding payments for sub contractors for work done, for payments received but not paid to the sub contractor. I even had to ask PDRM D7 to assist and mediate with one of them lest they decide to go for me. I went in at their invitation as Chairman and started work.

All their projects were behind schedule. All the advances from the Government, all the payments for work done went into their own pockets and not to their sub contractors. And yet through their deviousness they somehow got more projects and more advances and pocketed more payments meant for their sub contractors. They did flood mitigation projects on the Klang River and in Perak  somewhere near Pasir Salak where Tajuddin is the MP. The relevant Jabatan Parit officers were on their payroll. Delayed projects were given numerous extensions. Complaints from sub contractor to these government servants were ignored. Money buys everybody.

But this I now know. When people are out to cheat and deceive you right from the start you do not have a fighting chance to survive. Again I worked for no salary – only profit sharing if and when the company became profitable again. When I had enough of their lying and cheating I left taking the TV and the Hi Fi set that was in my room as payment for my months of work with them.

So please  - Persatuan Bekas Perajurit Wilayah Persekutuan and WAJA – do not do business with these companies. They will be more devious then you and can outflank you when it comes to doing the dirty on you.

These are all lessons learnt. I am the better for it. Today there are all memories that make me smile. There wll be other stories but for now it is past 5.30pm here and I need my rest. My favourite programs come up soon – The News. So enough for now. Salam.
Posted by STEADYAKU47 at Thursday, October 21, 2010