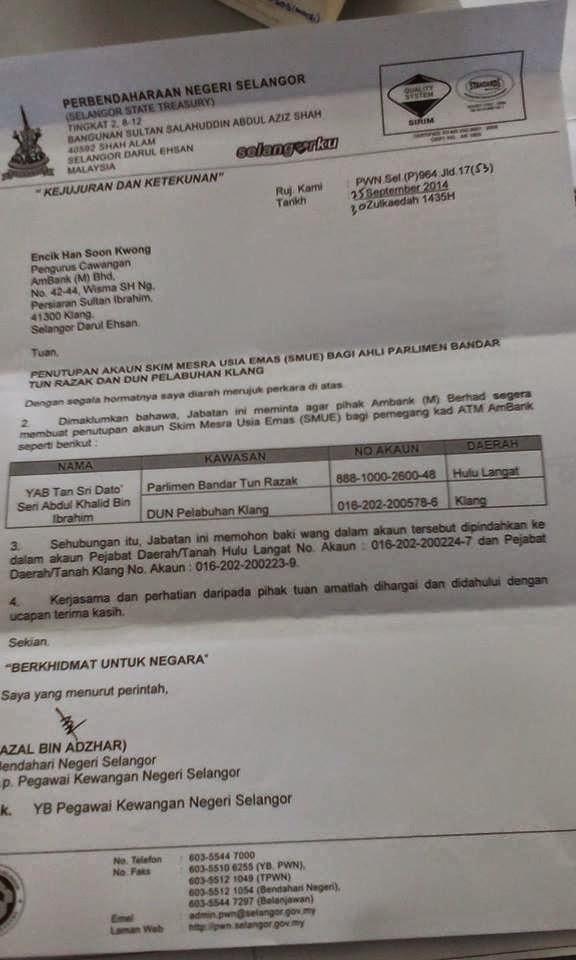 Former Selangor MB Tan Sri Abdul Khalid Ibrahim's state seat special officer Faekah Hussin today said it seemed as though current MB Mohamed Azmin Ali wanted to punish not only Abdul Khalid but all the people in Port Klang and Bandar Tun Razak. — File pic credit Media Selangorku
KUALA LUMPUR, Oct 1, 2014:
Selangor Menteri Besar Mohamed Azmin Ali has been criticised by former Menteri Besar Tan Sri Abdul Khalid Ibrahim’s state seat special officer Faekah Husin for starting out on the wrong foot.
In a statement released today, Faekah accused Mohamed Azmin of instructing the bank to freeze the accounts of the Skim Mesra Usia Emas (SMUE) in the parliamentary constituency of Bandar Tun Razak and state assembly constituency of Port Klang, both of which had elected Abdul Khalid to represent them.
“Directives given in the name of the state treasurer were issued on Sept 25, 2014, and I believe they were made on the orders of Menteri Besar Mohamed Azmin Ali.
“The prompt actions of the new Menteri Besar seem to be an answer or response to the commandment of the Sultan of Selangor who had advised that the Selangor state leadership put aside disputes and open a new chapter for the people,” said Faekah.
She said it seemed as if Mohamed Azmin wanted to punish not only Abdul Khalid but all the people in Port Klang and Bandar Tun Razak.
She said it was saddening that “such drastic actions were committed against the former Menteri Besar, who had worked tirelessly to empower the people’s welfare programmes under the Merakyatkan Ekonomi Selangor (MES)” programme.
“It turns out that all the services of Abdul Khalid over the past six years at the helm of Selangor were ignored because of the political revenge sowed by the new Chief Minister.
“Mohamed Azmin Ali had begun his career with a move that would destroy the nature of respect from citizens and government officials for state leaders.
“This culture is very different from that under the administration of Abdul Khalid, who had been working professionally to instill a culture without the influence of political and personal agendas,” said Faekah.
She urged Mohamed Azmin to give a reasonable explanation why this instruction was made and that this was not meant as political revenge or intended to punish Abdul Khalid.
“I believe the others in the leadership do not agree with this move because it could stir up continued hatred towards Pakatan Rakyat, which sprung up and spread out long ago after the start of the ‘Kajang Move’.”
Posted by STEADYAKU47 at Wednesday, October 01, 2014