The real cost of the Royal tour Down Under revealed

The cost of the Easter visit by Prince William, Kate and baby George to Australia has been tallied up.
The royal couple reportedly 'cut costs' on their whirlwind tour Down Under, with taxpayers footing the bill of just under half a million dollars.
The breakdown of the Royal travel expenses, according to Freedom Of Information documents obtained by 7News is;

Our FLOM  aka Fat Lady of Malaysia recently flew to Padang. I don't really care and want to know why she flew down there...for all I care, this bitch or witch (delete what is not applicable) should have flown down there on her broom stick and save our taxpayer a bundle! 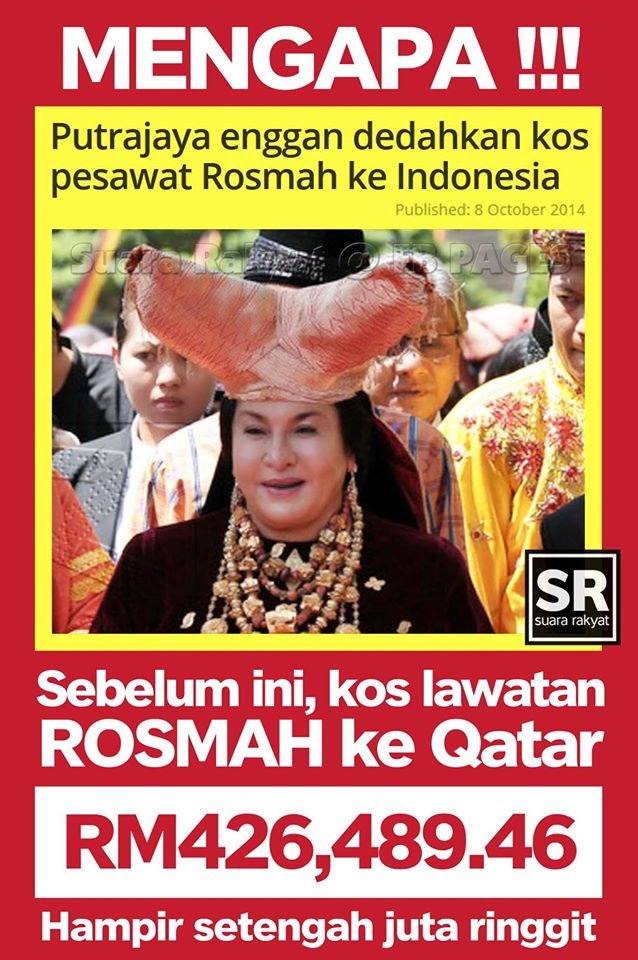 What logic is this?

And what the f@*k is "a suitable estimation for service" that Shahidan said the trip had cost?

The government has refused to disclose the specific cost for a flight ferrying the prime minister's wife, Rosmah Mansor, that flight trackers detected over Indonesia on the same day she had received a Minangkabau award in Padang.

DAP Seremban MP Anthony Loke had asked Putrajaya to disclose the purpose of Flight NR1 - with the registration number 9M-NAA - flying to Padang on Aug 27.

He also wanted to know the cost involved and passenger manifest.

However, Minister in the Prime Minister's Department Shahidan Kassim, in a written reply, merely said the flight was on official business to Singapore and was carrying Prime Minister Najib Abdul Razak, Rosmah and a government delegation.

"The flight is an official government flight which is used for the prime minister's affairs. All costs involving the flight is within a suitable estimation for the service," Shahidan said.

The aircraft was detected by FlightRadar24 on Aug 27 to have flown from the KL International Airport (KLIA) to Padang and then travelled to Singapore before returning to KLIA on next day.

Loke criticised the government's refusal to disclose the details, stating that the secrecy went against Putrajaya's promise of transparency.

"It is very clear they are hiding information. I have asked many questions of this nature and I always get the answer (figures) but not this time," he lamented.

The award comes with the title 'Puan Puti Reno', which means the supreme princess in Minangkabau royal family.
However, Najib was not spotted there during the award reception.

According to FlightRadar24, the 9M-NAA jet began its journey from Subang Airport and stopped for 53 minutes at the Kuala Lumpur International Airport, perhaps to pick up both Najib, Rosmah and a number government officials.

It then continued its journey to Padang where it stopped for one and a half hours before heading to Singapore. Najib was on an official one-day visit which included the opening of Malaysia’s first Agro-bazaar outlet overseas.
The plane left Singapore the next day for KLIA and finally returned to Subang Airport.

Shahidan's return reply did not deny nor confirm any detour to Padang, Indonesia, as stated in Loke's question.
Loke said that the use of the government jet involves public funds and should not be kept secret.
"Every sen spent for official services for the prime minister and his wife, as well as members of the administration, are public funds and can be questioned," he said.

Last year, Loke had also queried about Rosmah's flight to Qatar using a government jet, for which the government disclosed that an amount of RM426,489.46 was spent. - mk