The Fancy Flights of Our VIPs

THE Malaysia Airlines System’s flight MH370 with 239 souls on board has been missing for seven months. The search for it has resumed in the Southern India Ocean.

And yet we have the technology to track down the private jet ferrying the Prime Minister, Mohd Najib Abdul Razak and his wife, Rosmah Mansor, to Indonesia and Singapore.

The DAP MP for Seremban, Loke Siew Fook, recently asked a question the Parliament based on this air tracking technology.

Loke cited not only the flight number (NR 1) but also the registration number of the aeroplane (9M-NAA) and the radar that tracked it (Flight Radar24).

Like a stalker of Hollywood celebs, Loke followed the progress of the fancy flight from KLIA to Padang and Singapore before returning to KLIA on Aug 27.

I am giving Loke the benefit of the doubt. I don’t think he was stalking the PM or his wife. Instead he was stalking for information so that he could ask an accurate question in the Parliament.

He asked the government to disclose the purpose of the flight, the cost involved and passengers on the airplane. My Internet search indicates that aircraft 9M-NAA is the RMAF Airbus A319.

Despite his thorough homework, Loke and the House received only a written reply from Minister in the Prime Minister's Department, Shahidan Kassim, saying that the jetliner was on an official flight Singapore and was carrying Prime Minister, his wife and a government delegation.

"The flight is an official government flight which is used for the prime minister's affairs. All cost involving the flight is within a suitable estimation for the service," the defender said.
The flight, according to online media reports, was detected by flight trackers on the very same day that the PM’s wife received the highest Minangkabau official award in Padang, Indonesia.

I would like to thank Loke and aviation enthusiasts for their interest in tracking the movements of our VIP aircraft because, for a small nation, we have many expensive VIP aircraft.

One such enthusiast told me that our government (via TUDM) owns and operates nine VIP aircraft – fixed wing and rotor.

My Internet search of the RMAF confirmed that fact. The RMAF has in its inventory nine VIP transport aircraft – a Boeing Business Jet, a Bombardier Global Express, a Dassault Falcon 900, an Airbus A319, an ageing Fokker F28 Fellowship and two each of Sikorsky SH-3 Sea King and Sikorsky S-70 Black Hawk.

The Queen of the UK and its realm has a much smaller fleet of VIP transport and they are older than our state-of-the-art fleet. More often than not she uses commercial flights, normally flying with British Airways.

Our VIPs know how to travel in great style and comfort.

Wallahuaklam.
Posted by A KADIR JASIN at 11:56 AM

The Airbus ACJ319 with tail number 9M-NAA operated under the call name “NR1” or “Perdana 1” and is the official aircraft for the prime minister, similar to that of the US president’s Air Force One. 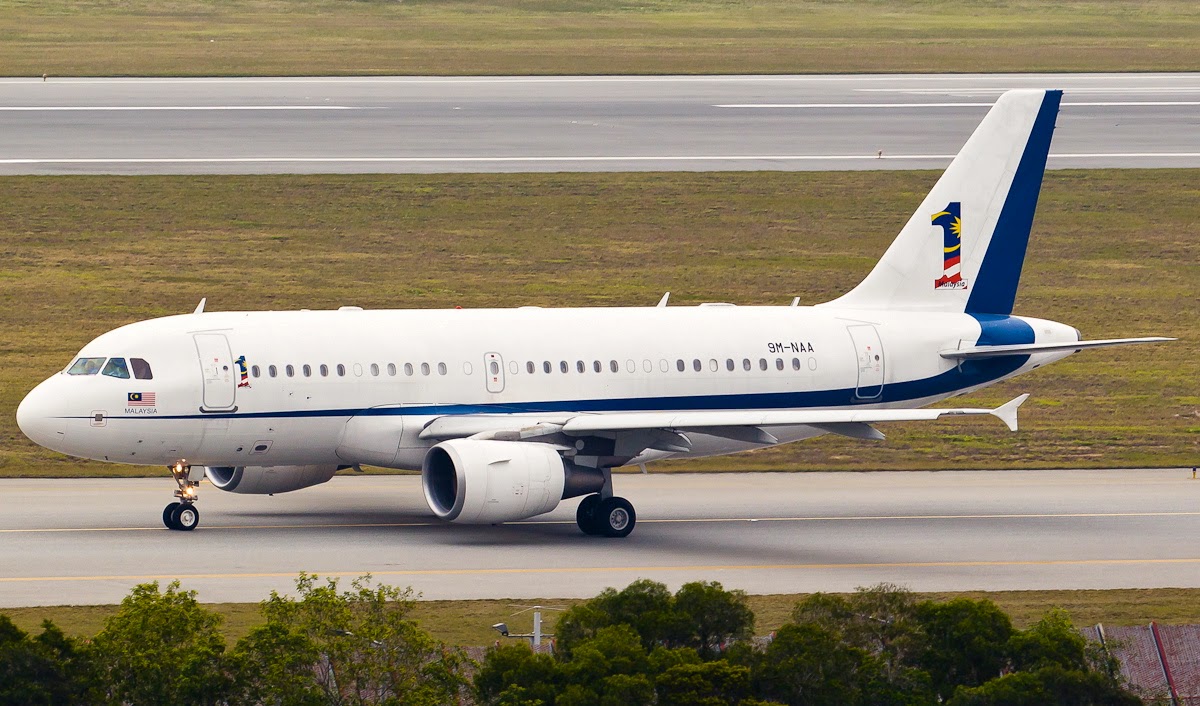 It first came under the spotlight in 2011 when Najib flew on the Airbus ACJ319 to Perth, Australia, apparently on holiday. 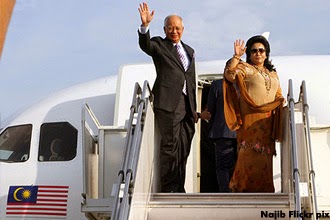 The aircraft comes with a lounge, a private room equipped with personal bathroom and has wifi and phone access while in the air.
According to the company's brochure, the approximate operating cost for its Airbus ACJ320 flight is US$8,350.31 (RM27,501.75) per hour.