Is that all you have got? I don't care if Rafizi walks with his hands on his head, swings his hands by his side or have both his hands in his pockets playing billards with his balls! 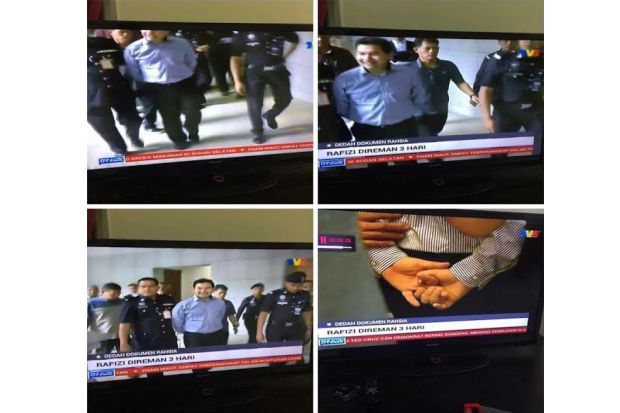 There been much talk of the above images of Rafizi walking with his hands behind his back. Hell that Twit of an IGP has even come out of his tempurung toTweet :

www.themalaymailonline.com/malaysia/.../rafizi-was-never-cuffed-igp-s...
8 hours ago - Responding to criticism.... the Inspector-General of Police said Rafizi Ramli  was never handcuffed at any time when he was arrested. ..

Woi you Twit of an IGP....Is that all you have got?

Your officers arrested a Member of Parliament outside the gates of parliament while he was  on his way to pick up his two year old son from daycare...and the focus is on "Rafizi berlakon kena gari. Perangai macam celaka (Rafizi acting as if he was handcuffed. A despicable behaviour".

I don't care if Rafizi walks with his hands on his head, swings his hands by his side or have both his hands in his pockets playing billards with his balls! Nor do I care if he is dressed in purple, or if he had grinned or growled at the media. I have no interest in knowing where he is being remanded or what this Twit of an IGP has to say about Rafizi not being handcuffed "This time around!"  Why is he not handcuffed this time around? Why was he handcuffed the first time around?

The question we want answered is why was a Member of Parliament arrested at all!

But it is done.

And this Twit of an IGP and the Umno led BN government knows the repurcussions and ramifications of arresting not only Rafizi, but any one who they deem to be a threat to "national security".

That term "national security" is now a joke.

I would suggest that the obesity of the first lady is a threat to our "national security" because her weight could mean the difference between safety and danger if ever the First Couple were on a boat that is in danger of sinking in a storm because it was overweight. Who do you throw overboard to lighthen the load and allow the boat to be less in danger of sinking? The DPM or some other Minister or VIP or FLOM? Should she not be arrested as a threat to our "national security" BEFORE she gets on that boat with the PM. Huh!

Now what are the ramifications and repurcussion of arresting Rafizi or anyone else deem to be a threat to our "national security?"

You make them into heroes....wira negara! That includes that arrest of the 82 year old Kassim Ahmad by JAWI. 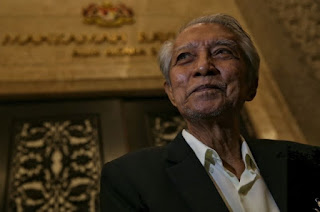 When you arrest Rafizi you make him into that Wira...and we have need of more Wiras in the Malaysia that we now live in. So please you Twit of an IGP...go do some more of your political masters bidding. We want more heroes!

And in the fullness of time, these Wira's will preside over the Malaysia that we all aspire to : One with ethics, morality and the rule of Law, not as you see it, not as your political masters sees it....but as we see it : Justice served to one and all without fear or favor.

Until then this IGP Twit can go on Tweeting!
Even though Law and Order he is not addressing.
This idiot thinks he is Ketua Bahagian
But to us all he is just a Comedian
Because to all of Umno's bidding, he is agreeing!
Posted by STEADYAKU47 at Friday, April 08, 2016