You are Prime Minister of Malaysia. You wake up to be waited hand and foot in the splendor of Seri Perdana. Every whim and fancies, every one of your wants and needs are catered for. You have hundreds of millions if not billions in your personal bank account and yet this is what awaits you as you face the day!

Payment to the Prime Minister!
There is an even more serious angle to this explosive set of discoveries. Sarawak Report has learnt that the on-going 1MDB investigation into Najib Razak’s AmPrivate Bank accounts in KL has also established that enormous payments came in from the very same source a few months earlier.
In 2011 Blackstone Asia Real Estate Partners Limited paid a total of US$170 million into the same private account belonging to Najib Razak which later received US...
Continue reading


Proud legacy of John Howard in the aftermath of Port Arthur massacre. And then you have IGP of Malaysia authorising gun sales by his own daughter.

‘Too dangerous a challenge to ignore’
THE events of the Port Arthur massacre on April 28, 1996, shook Australia to its core.
news.com.au 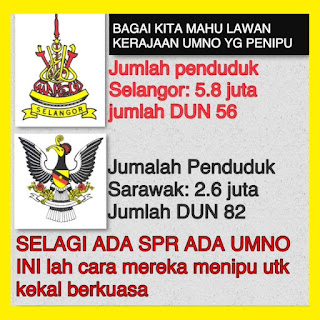 These are but just some of the headlines that confronts Najib almost every day.

Is it worth it Najib?

Is it worth it to know that maybe, at the end of it all, prison awaits you and your wife? The only thing keeping you out of prison is that you are still president of Umno and by default Prime Minister of Malaysia. When that ends, have you made plans to leave Malaysia? Are you already preparing yourself for that day? Where will you go? How will you leave the country.... what about your children?

Whether it is after a night of troubled sleep, or during breakfast when Rosmah berates him over his failure to follow her "advise" on the Bank Negara Governor appointment or even as he arrives at the PMO....whatever the circumstance Najib..... knows that all is not well in Camelot ....or as those in certain quarters in Umno would like to say...."does he still have a lot" (of cash that is!).

The election is still just a dot on the horizon and far from being a point of contention. What Umno wants now, is to make merry and hay while the sun shine. Najib is their man of the moment for both. His political demise seems imminent and yet there is within Umno that air of "wonderous possibilities" as each Ketua Bahagian understands that their support of Najib is gold to them.....and so they cling to each other even as Umno sinks.

It is only when that "election dot" becomes a recognizable blip that the pendelum might start to swing towards reason and realities. Until then we will have to suffer the arrogance and greed of Umno politicians who can see no further than the tip of their nose and have memories no better than that of a goldfish.....but while their arrogance and greed grows by the day, the election too grows closer by the day.