When Does Greed Stops?

The question I most ask myself when thinking about Malaysia is this :

"When does greed stops?"

It is greed that is driving so many Malay leaders into being the monster that have have become. It is greed that has many of them forget that in life there is compassion, in life there is grace and there is also respect, ethics and morality to be thought of in living it. In life there is a need for us to be our brother's keeper, to look out for others who are less fortunate than us, less able because of circumstances, to be able to take care of themselves and their loves ones.

And in life there are times when we need to stand up against injustice, against bullying and of course, against arrogance and greed. 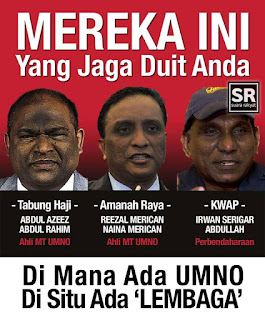 This is such a time.

Today my Prime Minister has been accused of, and being complicit in “embezzlement”, “fraud”, “criminal mismanagement”, “misconduct in public office”, “forgery of a document”, “bribery of foreign public officials” and “money laundering”. He is accused of being so not only by the Opposition, not only by Members of Parliament, not only by NGO's and other Malaysian....NO!.....now my my prime minister has been officially accused by the Swiss Attorney General's Office! And that news has gone global. 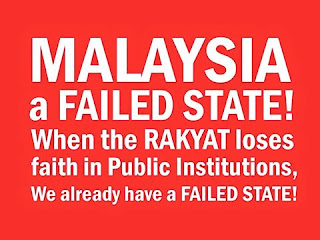 "Malaysia Boleh" is no longer a phrase that brings a smile and that rush of pride to us all...it has now become the "catch phrase" for this BN government under Najib Razak...all for the wrong reasons!

The one accused of doing all this is not some Despot or self-appointed President of some Tin Pot Alley African Republic from somewhere in the depths of Africa or someone from within the many troubled parts of the Middle East. This is not Gaddafi, Saddam Hussein, Marcos or Suharto that they are talking about. This is not even about Militaryy Rule that has just been done with in Burma or about the Military dictators of Thailand that even now are still in power there.

This is about Najib Razak. Son of Tun Razak, President of Umno, a Malay, a Muslim and still prime minister of my country. The prime minister whom he, his cohorts and the political party he is president of, claims to be the legitimately elected leader of my country. Huh! How can they all have the audacity to claim that when he has already been rejected as leader by more Malaysian than those who have voted to have him in office in the last election?

But these arguments on legality of office and the rights of an incumbent prime minister to do what he needs to do to defend threats to the sovereignty of our nation are now academic. We will have to leave it to the judiciary and history to deliver their final verdict on the matter. All this arguments pales into insignificance when we know that foreign governments have already begun criminal investigations into the criminal deeds of our prime minister!

Speaking for myself, I ask myself that question again : When does greed stops?

That is a question that only Rosmah and Najib Razak can answer. 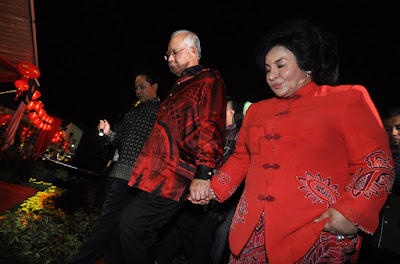 And so must the equally corrupt and arrogant deputy to Najib, Zahid Hamidi! 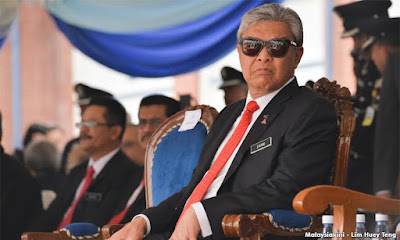 For in the images of these two, Najib and Zahid, can be seen all that is wrong with our country. Greed, avarice, arrogance and the unmitigated advancement of one's own self for personal gain!

And if the number one and the number two within our country are the personification and manifestation of greed, avarice arrogance and "the self"...what hope is there then of our Malaysia? Of our future and for the future of the generations of Malaysians to come?

I remember a question I asked of a friend, Zulkifli Sulong, about a decade ago about what it would take for our politicians to understand accountability and their responsibility of office as the elected official of the people they represent. I asked him why are so many of them corrupt? Why does greed overcome all other considerations once they have political power?

We were then having lunch in a crowded Malay restaurant beside Hospital Takaful in Jalan Pahang when Zul was still with Harakah. I remembered his answer well and I listened well because this friend of mine has already been arrested under the ISA and knew too well what politics in Malaysia entails. He said "Seein.....susah nak tukar!".

Indeed it is difficult, if not impossible, to take the jaguh kampong out of the many Malays who now within Umno. Too fast, too soon and too generously too many of them have become  the recipient of the many political spoils of Umno's many decades of political dominance...or should I say decadence! What we now see in Umno is but the tip of what is still to come should these same Umno leaders continue to politically dominate for the coming decade.

And I mean no disrespect to kampong people by that "jaguh kampong" remark. It merely describes what happens to Mat, Din and Dollah when changes happens to them before they are ready to handle the change responsibly.

For the Chinese. no matter their origins, money has a sobering effect on the individual they finally become. Just look at the rich Chinese around us in Malaysia today...are any of them uncouth in the manner they conduct themselves? Are many of them so intent on making money that they forget the need to give back to society, to be patrons of the arts and to take care of their own - be it family, race or religion? With the Chinese wealth is welcomed but it is what they can responsibly do with wealth that the Chinese do excel.

Not the Malays. And none have become so good an example of what harm wealth will do to anyone than the wealthy, insanely rich Malays we now have within Umno. There is no need for me to elaborate on this....examples are there to seen if you will only look.

What should be of concern to us Malays to day is that the antics of these insanely wealthy Jaguh Kampongs politicians has become common knowledge not only to Malaysians everywhere, but more embarrassingly to everyone else in the world.

And yet Umno is in denial. Yet Umno preoccupies itself not with cleansing itself of corruption and arrogance but continue to be complicit with the covering up of corruption and increasingly supportive of its advancement.....the acquisition of material wealth as if there is not going to be any more tomorrows!

Maybe I am just stating the obvious.

Maybe you all have grown tired of my "lecturing"....but I am not done yet with my tirade against a prime minister who has now been accused of being complicit in “embezzlement”, “fraud”, “criminal mismanagement”, “misconduct in public office”, “forgery of a document”, “bribery of foreign public officials” and “money laundering”....because if I do become tired then the time has come for me to power down my MAC, switch of that light over my desk and go enjoy what is left of the rest of my life with the people that I love...and not worry about my country anymore.

But let me tell you this.......only when I can stop breathing and still live will I then be able to stop worrying about my country....so until then, I will continue to write!
Posted by STEADYAKU47 at Wednesday, April 13, 2016