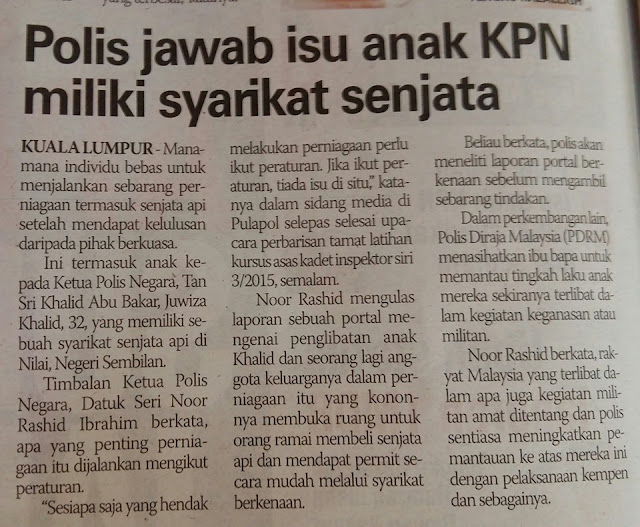 This was his comment on Khalid Abu Bakar's (the PIG himself - Police Inspector General) daughter selling arms and ammunition.

Your officers face danger every time they go about their business of apprehending criminals and some of these criminals have guns and will not hesitate to use them against the Police.

https://www.nst.com.my/.../three-armed-criminals-killed-shootout-police
Apr 8, 2016 - JOHOR BARU: Three armed criminals were killed in a shoot out with police ... In the 5.45pm incident, policemen gave chase to the suspects, aged between 22 .

Should you not be doing every thing in your power to ensure that the supply of guns and ammunitions - legal or illegal - are kept to the minimum, if not banned altogather?

Is it not a fact that guns stolen from people who are licensed to carry guns and ammunitions are used in robberies and in shot outs with the police.

And you are making a public statement to say that it is okay for daughter of the Chief PIG to sell guns and ammunitions that might eventually be used against your own police officers?

Can you try and work out in your head how wrong that can be? Or are you too dumb to understand what it is that I am trying to tell you?

My late father, Hamid Latiff did not reach your level in the Police. He retired as Director CID. From what I know of my father, his values and his sense of right and wrong, I would not insult him by asking if I could open an arms and ammunition outlet that might one day result in the death of any of his officers. That is what I mean when I asked you to "use your otak!".
The daughter of the Chief Pig should have used her "otak" to decide what business ventures she wanted to undertake....and if she did not have the "otak" to work that out...then the PIG himself should have told her that he did not want her to do any business that might eventually cause the death or harm to any of his officers.

We know that you and your PIG boss see the abuse and misuse of public office by those Umno politicians that you serve. We know you see Najib's brothers and children doing "legal business". You see them making insane amounts of money and you start to think maybe it is okay for you and your family to do so as long as it is "legal". Perish that thought!

There is no grey area when considering the right or wrong, the good or bad about a daughter of the PIG selling arms and ammunitions to anybody! No grey area at all. It is  simply wrong.

Kalau engkau ada otak, kalau the culture within PDRM is one of taking care of its own....that Khalid guy who is the top PIG would have stopped anyone he knows from selling guns and ammunitions because he has the responsibility of keeping his officers as safe as possible.

Such is the state of PDRM today that right and wrong are seen through the corrupt eyes of Umno politicians.....and none of them care about ethics and morality anymore....and it seems that day by day the culture within PDRM rivals that which exists among Umno politicians, a culture where "Cash is King!".