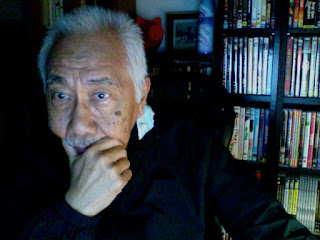 5.12 AM Early Friday morning. I cannot sleep and have been awake for almost an hour...it is too early to start the day...and so I make myself a cup of Moccona coffee, put on my socks and wind-cheater for the morning is cold...and power on my Mac for I know that when I cannot sleep, I need to write.


Last night at around 10, I went downstairs to throw out the rubbish. I was in my shorts and slipper...it was not cold...just cool. On the way back to my apartment, there was someone in the lift lobby also waiting for the lift. I was engrossed in my thoughts but I did noticed that he was at least twice my size, taller and he was someone I have never seen before. We nodded to each other in greeting and got into the lift together. I pressed for my floor and he, for his. I was engrossed in my thoughts and did not give another thought to the other guy until we reached my floor....and then said good night to him as I stepped out of the lift. He answered "Night..." and he stayed inside the lift to get to his floor.

It was only after I stepped into my apartment that I started to think about what had just happened. What happened was that late at night, I got into an enclosed space with a complete stranger, bigger and stronger than me....and if he were to decide for any reason, to do me harm, there was no way I could escape. ...why did I do that?

I did so because 99.99% I felt safe to do so. In the four years that I have stayed in this apartment block there has never been a time when I felt unsafe getting into the lift at any time of the day or night with anybody that happened to be in there with me....and that is a good feeling to have in a place that you live in.

Ditto for Melbourne, Ditto for Australia.

So you can imagine my thoughts for the people of Malaysia today!

In these last few days Rafizi was sentenced to 18 months in jail for doing his duty as an elected representative in parliament. I see Tun Dr Mahathir and his wife sitting by the roadside to protest the arrest of Maria Chin. I see MP Khalid being the object of hate, vitriol and physical harassment and attack in the grounds of parliament and only the presence of security guards prevented him from being harmed by his attacker....and yesterday this :

And then the attack on Zunar's exhibition in Komtar!


These, and the many more unsettling and terrible things that have been happening in our country, plays over and over in mind....and this morning was no exception.

Why are things getting from bad to worse.

Let us not get too worked up over what happened to MP Khalid in the grounds of parliament yesterday because while Tajuddin has fashioned himself in the manner of other uncouth Umno MP's, I consider that Khalid himself is no better if he has brought himself to their level by labelling Tajuddin "sial"...even if it was deserved! I expect better from MP's who are on "our" side.

Our concern should be for the protection and safety of the Rakyat....the pubic at large. The safety of you and me, the officers doing their job, Zunar who is within his rights in exhibiting his work. Maria Chin who the authorities tell us is not only a terrorist but has links to the FBI or CIA. Rafizi who is only doing his work as an elected representative of the people....and any other Malaysians whose intent is to go out and earn a decent living and, when he or she feels like doing so, to be able to express their feelings for the manner their country is being run by the leaders that they have elected without being harassed or coming to harm.

These are serious concerns that grows day by day as this BN government pursues a political agenda that increasingly requires the judicial and law enforcement authorities to take instructions from their political masters to do what is needed to ensure a meek, pliant and submissive population. And when using the judicial and law enforcement authorities to achieve Umno's odious political agenda is not enough, Umno uses the Red Shirts and any other unnatural force that money will buy to achieve the same ends.

That is why today there is law in our country but there is no order.

There is a government in Putrajaya but it is corrupt.

And all that law and order and government should do in Malaysia is not being done.

All that stands between us and anarchy is you and me.

Surely you know that in anarchy Najib Razak will reign. In anarchy Umno will still rule by decree. In anarchy our rights will be taken away and our freedom curtailed. In anarchy this BN government will continue to govern as they governed today : self serving, arrogant and without responsibility and accountability for what they do in the name of government!

Am I mistaken to think that Najib still has a life in politics after 2016? Am I wrong in saying that Umno will still be a formidable force in politics come the next general elections? Is it impossible to see Anwar Ibrahim free by early 2017? Is it too much to hope that democracy and the well being and freedom of the rakyat will be the prime consideration of any government after 2016?