Yesterday afternoon, over a cup of Dilmah Tea...black...I sat alone in my living room thinking as any other Malaysians now days think....about ...what else...but 1MDB.

Not of the billion's that had already been siphoned out. Not of the people who have become insanely rich by partaking in the biggest scam that has ever been perpetrated on our people and on our country. Not about the cover up, not about from where more money is being channeled (from EPF, Tabung Haji and God knows what other sources still to be revealed)... money that is desperately needed to keep 1MDB "solvent" and afloat so that past, current and future misdeeds can be hidden. Not about the American DOJ, the Swiss, UK, Singapore, Australia and the other countries all now involved in various stages of legal action to bring the perpetrators of this massive financial scam to account....not about all this that has already come to pass.....

For sure all this and more did pass through my mind....but in quiet repose, I was more thinking about the main players of this mother of all scam....specifically about two of them : Najib Razak..... 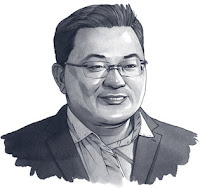 This is what went through my mind.

Did Najib actually got in touch with Jho Low and together planned the scam to get billions from 1MDB for themselves?

Or was it Jho Low who used Najib to make himself a billionaire and in the process shared some of the billions with Najib and with many others.

Or was it all planned by Kak Rosmah? Rosmah got Jho Low . She told Najib top work with Joh Low ...and they all got rich in the process?

Or were there other hidden hands still to be revealed that had put together this most audacious of scams that had drained billions out of our national coffers and in the process made criminals of them all?
Who scammed who?

Am I to believe that Jho Low, in his very early 30's was able to get the Prime Minister of Malaysia to not only dance to his tune but that Najib allowed Jho Low to lead him by his nose and played him out for a sucker and a fool ...a fool who was happy to be Jho Low baruah not once, not twice but countless time in return for billions deposited into his personal account?

How was a young Chinese in his early 30's able to make the prime minister of Malaysia his baruah?

If it was Najib who sought out Jho Low then you must question the criminal intent of this prime minister who was willing to abuse high public office for personal gain.

And if it was Kak Rosmah who made the puppet dance to her tune...then should you not ask Najib "who wears the trousers" in Seri Perdana?

No matter what you think, no matter how you look at it.....and even if you manage to ignore that most toxic of God's gift to us.....GREED.....one thing is crystal clear : Najib has some serious personal issues he needs to address.

Not just being a push over for Kak Rosmah...there are many of us that will allow our wife to do that to us and more  for some peace of mind in the house.

Not for allowing himself to be duped by Jho Low for we too have from time to time been duped by others.

But where Najib has failed himself is in the manner he has thought that all this that 1MDB has thrown up...the billions squandered, the billions siphoned out, the laughable attempts at covering up the massive movement of those billions....the constant denials after the fact has been exposed in the public domain....that all this will NOT cost him his job as PM and President of Umno!

And not only that......this bumbling idiot from Pekan really thinks that Cash is King...that with the billions he has, he will remain King.

And that my friend was my final thought as I sipped the last drop of that delicious Dilmah tea (black) yesterday afternoon....that Najib Razak is the mother of idiots whose end is long-awaited not only by many of us, but also by those within Umno and BN who knows only too well, the need for them to rid themselves of an idiot who really thinks that "Cash is King" if Umno and BN is to survive in opposition after the next general election!
Posted by STEADYAKU47 at Wednesday, November 23, 2016